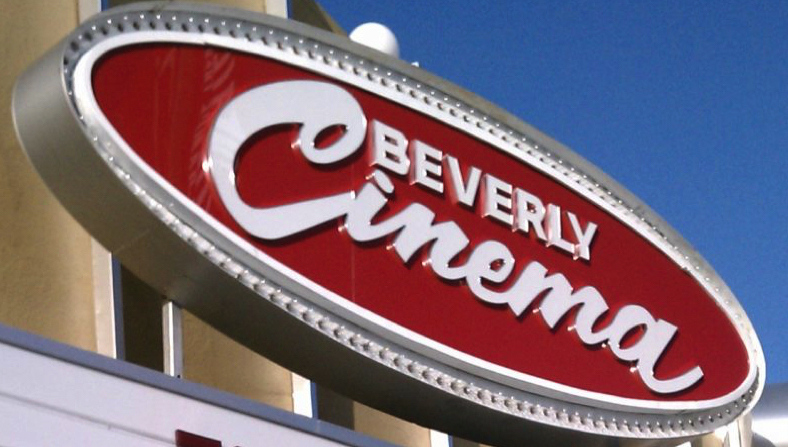 A lucky group of 007 fans in Los Angeles received an unexpected treat last week when beloved Bond star Luciana Paluzzi made a surprise appearance at the New Beverly Cinema for a rare public screening of Thunderball. This was the third film shown in the historic repertory theater’s month-long series dedicated to the early James Bond movies.

Like each film on the New Beverly Cinema’s July calendar, Thunderball was selected by theater owner Quentin Tarantino to help celebrate his upcoming feature “Once Upon a Time… in Hollywood.” Tarantino’s eclectic choices this month focus on strong leading men and groovy “It” girls from the swinging ‘60s era, so naturally the Connery and Lazenby films belonged somewhere on the program. 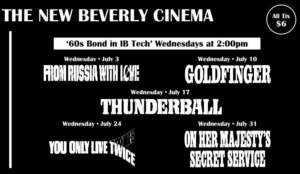 The New Beverly Cinema is renowned for showing movies exclusively on celluloid – whether 35mm or 16mm – and Thunderball was no exception. The original I.B. Technicolor print that we watched on Wednesday, July 17, looked gorgeous on the big screen. It sported minimal wear and tear, remarkably stable image quality, and jaw-dropping color. For those of us who were seeing it projected in 35mm for the very first time, this was a very special event. 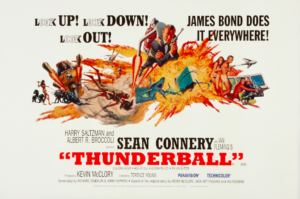 But it was Ms. Paluzzi’s surprise in-person appearance that turned an exciting screening into an unforgettable one. The way it happened is surprisingly simple. I invited her to join us for the movie about two weeks earlier, and was thrilled when she accepted. Along with some help from the New Beverly Cinema, that’s basically all it took. Needless to say, Ms. Paluzzi was every bit as gracious and charming as you might expect.

It’s always fun when a Bond star attends a public film screening, but it’s even better when it’s someone who’s as amazing as Luciana Paluzzi is in Thunderball. She’s so fantastic in the role of SPECTRE assassin Fiona Volpe, it’s easy to see why most Bond fans consider her one of the best female villains in the series. Personally, I’d go much further. When you take into account her rocket-launching motorcycle, the way she handles that powder blue Mustang convertible, her sexy “wild thing” come-ons, her dead-aim skeet shooting, how she supervises the kidnapping and killing of agent Paula Caplan, and how she mocks Bond’s masculinity to his face, I’d rank her alongside Oddjob, Jaws, and May Day in terms of top-tier henchmen.

Ms. Paluzzi attended the screening with her husband, Michael Jay Solomon, plus a large group of family and friends. Several members of James Bond Radio’s Los Angeles community – including JBR’s Music of Bond co-host John Williams – were there, too, having been tipped off in advance that something special was in the works.

But most people who purchased tickets for the film had no idea they were about to meet a genuine ’60s Bond icon. Many stayed for almost an hour after the movie to take photos with Ms. Paluzzi and to talk to her about her career.

After being introduced by the theater’s manager at the start of the screening, Ms. Paluzzi stood up from her seat and greeted the audience’s gleeful surprise with a wave and an appreciative smile. A vintage cartoon and a collection of 35mm Bond trailers preceded the main feature.

When the lights faded up again after Thunderball, I walked to the front of the house and spoke into a microphone: “Thanks for coming, everyone. Today it is my sincere honor to introduce one of the stars of Thunderball. Please join me in welcoming the incredible Luciana Paluzzi!”

We began our Q&A by discussing her profound admiration for director Terence Young, and her close off-camera friendship with him as well. Later, I asked her what she meant when she famously referred to Sean Connery as “the easiest actor she’d ever worked with.” I also questioned whether she’d seen any sign on set that Connery might’ve been tiring of the Bond role by that point in his career, as many have suggested. “Not at all!” she exclaimed, apparently never having heard such a thing before.

We segued into talking a bit about the stunning costumes, hair, jewelry, and makeup that she wears throughout Thunderball, which prompted her to praise the entire crew’s flawless attention to detail. Then, I asked her how it feels to be a member of the exclusive Bond Girl club. She answered thoughtfully that although appearing in Thunderball may have caused her to miss out on more serious roles, it also opened her up to lots of fun opportunities and wild characters to play.

At that point, I thought we were finished with the Q&A, but Ms. Paluzzi had something else to say. “I want to thank you, Matthew,” she told me. “I don’t know how you found me, or how this all came together, but I made this movie 55 years ago…”

Her voice began to choke-up with emotion and her eyes welled up.

“…and now, for the first time, my grandchildren have seen it on a big screen.”

As you might expect, the applause from the audience was thunderous.

Special thanks to the New Beverly Cinema for their assistance with this special appearance. 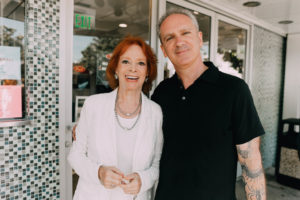