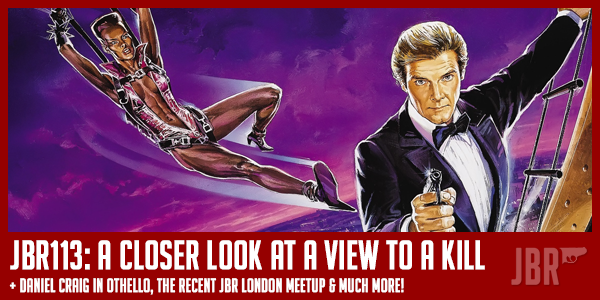 As a movie that divides opinion among Bond fans we thought we’d dig a little deeper into A View To A Kill this week. Before we turn the microphone over to the JBR listeners for our upcoming ‘Listener Review’ episode, we decided to seek out two proud defenders of the film.

First up we have Mark O’Connell, author of ‘Catching Bullets: Memoirs of a Bond Fan,’ who frequently cites AVTAK as his all-time favourite Bond film. We’re also joined by Andrew McNess, who is so passionate about Bond 14, he wrote an entire book on the subject called ‘A Close Look at A View To A Kill.’

In addition to all the AVTAK talk we hear about Daniel Craig’s recent on-stage performance in Othello. We get the full report from the recent JBR meet up in London and we hear about ‘JBR South Coast Central’s’ first on-location meet up coming up early next year.