I Will Return: The Lost Bond Song 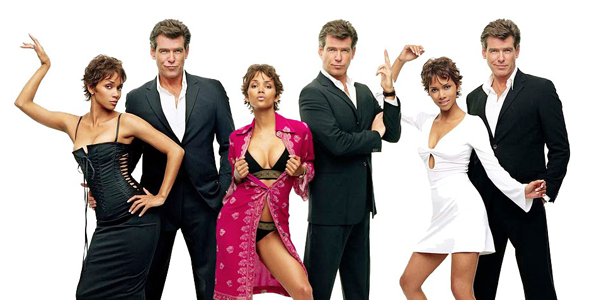 After scoring films for Roland Emmerich and Dean Devlin, who had both created the 1994 film Stargate and then went on to do the 1996 smash hit Independence Day, England born composer David Arnold’s first running with James Bond was in 1996 whilst working on his album ‘Shaken and Stirred:  The David Arnold James Bond Project’ which consisted of artists such as Iggy Pop, Propellerheads, Chrissie Hynde, Pulp, and former ABC singer Martin Fry to bring a fresh voice to nine of his favourite Bond songs and to bring them up to date with new arrangements. Close friend and collaborator Bjork had done a cover of You Only Live Twice but insisted that it wasn’t on the final album because she didn’t like it.

Thinking that John Barry would be insulted, because he had messed with his songs, Arnold was utterly surprised when Barry said he had made a wonderful job and strongly recommended him to EON Productions to score their latest Bond film.

Like John Barry, who had always weaved the main theme throughout the score, adapting it for love scenes, action scenes as well as sweeping vistas, Arnold did the very same for ‘Tomorrow Never Dies’. With the intense muting of brass from the opening bars of ‘Surrender’ for the action scenes and then the chorus, played either on strings or piano for the love scenes and then using it for the typical ‘Bond Arrives in another country” music cue.

Sadly, the title song was replaced by Sheryl Crow’s ‘Tomorrow Never Dies’ therefore pushing ‘Surrender’ to the very end of the film, being used only for the end credits.   The song ‘Surrender’ was performed by K.D Lang.

Pleased with what Arnold had done, EON asked him to score their 19th Bond film ‘The World Is Not Enough’.

Using the Barry template, Arnold worked on the title song with Don Black and Scottish group Garbage, incorporating the main theme into the score. This time it was used, mainly for the action pieces such as ‘Come in 007 Your Time Is Up’ and ‘Ice Bandits’ as well as being heard in ‘Welcome To Baku’.

For the love scenes Arnold composed a new sound, a beautiful theme known as ‘Elektra’s Theme’ and this was played throughout the second half of the film.   However as the mood of the film changes the theme later becomes dark and daunting. ‘Elektra’s Theme’ turned out to be an instrumental version of ‘Only Myself To Blame’, which was written by David Arnold and Don Black and performed by the legendary Scott Walker. ‘Only Myself To Blame’ was also intended for the end titles too, but was never used.

‘Die Another Day’ has got to be the most controversial film in the world of James Bond.   Probably about as controversial as when it was first announced that Daniel Craig was to play Bond or a black actor was to follow in his footsteps.

In my opinion the film was good until Bond had arrived in Iceland, and the director gave the impression that Iceland was all computer generated involving tsunami and invisible cars.

That’s the worst bit about the film over and done with. The good bit about the film is in the first half where we see Bond captured, tortured and betrayed, all being shown minus a title song.   The score itself was also a solid effort from David Arnold.

The word tradition is something that cannot be used for the 20th Bond film. The Bond tradition of having real life stunts seemed to end and instead computer generated images were created.   This way of thinking can only be described as a joke, thus making the scenes implausible.   The tradition of Arnold writing the title song, also came to an end with this film.

Madonna was asked by EON to write and perform the title song.   Sadly Arnold wasn’t asked, and believe me when I say the word ‘sadly’ opens up a ‘what if’ scenario as to how much better the title song could have been if Arnold had been asked. There is nothing Bondian about Madonna’s title song at all, in fact they may as well have played Eric Serra’s ‘Experience Of Love’ over the opening credits.

With the title theme being solely Madonna’s work and not a joint venture, Arnold could not incorporate it into the score without paying a fee.   This incidentally is why Sheryl Crow’s ‘Tomorrow Never Dies’ cannot be heard throughout the score of the film with the same name.

This then leads to both Arnold and Don Black having to work on another song called ‘I Will Return’ which was to be heard over the end credits (after all, James Bond Will Return!), but sadly a remix of Madonna’s theme song was favoured and so ‘I Will Return’ was never used.

Looking, or shall I say listening to the template that Arnold had worked with on his previous two outings, it is safe to assume that what was to have been ‘I Will Return’ can be heard within the score of ‘Die Another Day’.   Just like the theme for ‘Surrender’ and ‘Only Myself To Blame’ could be heard in the previous two films.

The first piece of music from Arnold we hear in this film is the gun barrel, which goes back to how Barry used it in all of his Bond scores. This being the six high brass notes followed by electric guitar as opposed to the four note riff which Arnold had used on his previous two outings. It’s interesting to note that Marvin Hamlisch had first used the four note riff for the gun barrel, in ‘The Spy Who Loved Me.

We then hear the first signs of what might have been ‘I will Return’ in the music that is played throughout the surfing scene, which starts off with brass and is then accompanied by strings, whilst the famous four note riff of the Bond theme is played in the background.

The skeleton reference, of what might have been ‘I Will Return’ is then played throughout the track ‘Hovercraft Chase’ and can be heard at 1:48.   This is played much clearer with brass and it can also be heard played on strings, whilst Bond is captured and tortured at the end of the pre-title sequence.

We then hear it again whilst Bond is introduced to ‘Peaceful Fountains Of Desire’ in the hotel room, first played on a piano, followed by woodwind and accompanied by strings throughout.   However, this is the first time we hear the theme develop into what might have been the chorus for ‘I Will Return’.   Again like that of Barry, the theme has been used for action and is now being used for romantic scenes.   Unfortunately, the music that is heard over the surfing sequence and for the majority of the film is not available on the soundtrack album.   However the track ‘Touch Of Frost’, is very much in the same style and tempo of this rendition of the lost theme.

The next time we hear this ‘lost theme’ is when Bond pays a visit to the Gene Clinic.   This piece of music isn’t available on the ‘Die Another Day’ album but is played quite clearly in front of heavy electronic percussion, which I must say, is used a lot throughout the score.   The theme begins with the four note riff famously used in the Bond theme, then followed by another four note riff which can be associated with the theme from ‘On Her Majesty’s Secret Service’ which was used a lot by Arnold.   It eventually kicks into the theme which begins with strings and then continues on brass.

The music that is heard during the sword fight between Bond and Gustav Graves contains a ‘speck’ of the ‘villains theme’ (Icarus) shortly followed by the lost theme which is heard fully in brass. However, it is then instantly followed by parts of the Bond theme.

As I mentioned before, the tempo, style and the romanticisation of the theme from ‘Peaceful Fountains of Desire’ can be heard in the track ‘Touch Of Frost’.

The lost theme makes its next appearance in the track ‘Whiteout’ and can be heard twice.   Firstly, it can be heard 20 seconds in, after the four note base line from ‘On Her Majesty’s Secret Service’ and lasts approximately 15 seconds.   It then makes a comeback towards the end of the track at 4:11, woven between the chorus and the first verse of the Bond theme.   Interesting to note that the verse of the Bond theme is similar to how it was played in the opening sequence of ‘Thunderball’.

Surprisingly the lost theme isn’t heard during the car chase on ice, or when the chase takes place in the Ice Palace.   However, even though the music for the latter scene is a great piece, it is really a reworking of the music that accompanies the action scenes that take place at the Gene Clinic and includes traces of Jinx’s theme.   The theme is finally played for the last time over military drums, whilst Bond and Jinx are taken to the airbase before they descend to the Antonov on switchblades.

It is interesting that the ‘lost’ Bond theme is played throughout the action cues and for the romantic scenes but is absent from the sweeping vistas.  David Arnold has said that ‘I Will Return’ may be used for a future Bond film and I really do hope so.   So far the music and songs that he has written for the Bond films have not disappointed me.