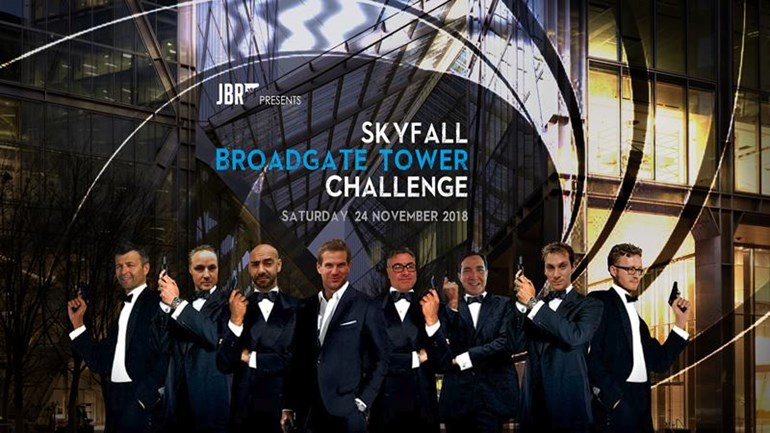 On Saturday 24th November 2018, several elite members of the JBR family will be embarking on a perilous mission to complete a challenge worthy of Bond himself!

The JBR team will be attempting to run, walk and crawl up a vertical mile of steps in London’s Broadgate Tower, which has been chosen as the UK event for the Vertical World Circuit 2018. That’s an elevation of 161 metres, with 877 steps over 35 floors x 12 = a total of 420 floors and 10,524 steps!

For the exterior shots of a Shanghai skyscraper in Skyfall, Eon used Broadgate Tower, located in the main business district in the City of London. Next to Broadgate Tower, two additional skyscrapers were added digitally in the film to make it look more like the densely built city of Shanghai. Constructed between 2005 and 2009, Broadgate Tower is the 12th tallest building in London.

Although the JBR 00-section won’t be chasing after Patrice, we will be running for an equally worthy cause. All donations will be in aid of a charity close to our hearts and that of the late Sir Roger Moore… it is of course, UNICEF.

Appointed as a UNICEF Goodwill Ambassador in 1991, Sir Roger was dedicated to helping those who were unable to help themselves – an epitaph that belongs as much to mankind as to the great man who lived by it.

“All children have a right to survive, thrive and fulfill their potential – to the benefit of a better world.”

To help support our JBR Skyfall Challenge and donate towards UNICEF, please click on the below link.

However large or small, every donation will be greatly appreciated.

If anyone else wants to get involved and run with us on the day, here is a link to the event page:

Thank you all for your support.