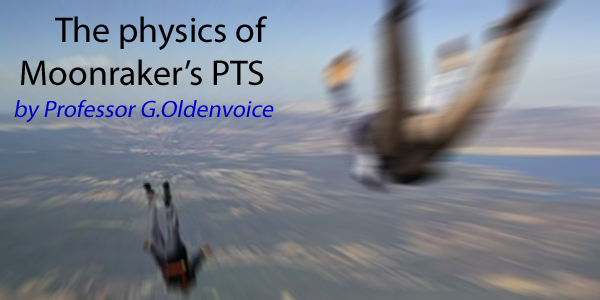 (or Are Chris and Tom talking bollocks as usual?)

The Laws of Physics are wonderful things. So are Bond movies. The sad thing is that they don’t always quite line up. And that’s especially true when our heroes, Agents Triple C and Triple T get all speculatory in their very best down the pub way. I’ve posted before about the interesting (and fractionally inaccurate) nuclear physics of Goldfinger’s putative cobalt-iodine “dirty bomb”, and there are of course some ‘quantum’ mechanical issues we could discuss (ho ho) – but today, let’s get back to some good old Galilean and Newtonian mechanics. Plus a bit of aerospace engineering.

I’m going to deal with three items from just the pre-title sequence of Moonraker, discussed so eloquently by the boys this week.

The Moonraker Shuttle is being transported on top of a Boeing 747 – presumably meant to be a 747-100, judging by the vertical, rectangular tail fins which exactly match the Shuttle Carrier Aircraft (SCA) 905 built in 1970 and procured by NASA in 1974. On February 18th 1977, the Shuttle Enterprise flew “piggy back” on the SCA for the first time, and on August 12th of the same year, made its maiden flight (in fact, glide) from the SCA, landing at Edwards Air Force Base, California.

Now, for reasons unknown, the Moonraker Shuttle was being transported across the Atlantic on an SCA. The massive weight of the orbiter meant that even the mighty Jumbo Jet could not have made the flight in one “hop”, and would have needed to land and refuel at least once. Where? Iceland would be the obvious choice (in which case the plummy RAF co-pilot Richard’s “we should pass over the English coast 15 minutes ahead of time, sir” would be silly), or perhaps the Azores – although the 1800m runway available at the airport there back in 1979 there would have made a landing tight to say the least. Tenerife is another possibility, which would mean an approach to the UK over the English as opposed to the Scottish coast. So far, so realistic. With a bit of suspension of disbelief. Which is always a good idea with Bond.

Right – so the two dudes in Bodie-from-The Professionals style leather jackets pop out of their late 70s futuristic and groovy stowaway pods, and get to the Shuttle’s controls. I have to say I seriously doubt the Shuttle would have been pressurised during a transport (as opposed to test) flight – but never mind that.

Fire her up, away we go….except the Shuttle would never have had any fuel on board when being transported, and only carried a tiny quantity on board, enough to use for the steering/retro rockets, when in orbit. The fuel burned through the main engines at lift-off was wholly supplied from the main external tank, in the form of hydrogen and oxygen. Even if we allow for a tiny bit of fuel left in the Moonraker’s fuel lines, it wouldn’t be enough to blast it off and fly it back to Drax’s lair.

But would the Shuttle even fly if detached in mid-flight, as Tom was worried it might not? Yes, absolutely! That was the whole point of the early test flights in California. Both 747 and Shuttle would have forward speed of (say) 500mph – detach the Shuttle, and off she glides. But only glides, mind you….

I won’t even start to speculate whether the exhaust from a fired up Shuttle might actually blow up a 747 in flight….

Once Jean-Pierre Castaldi (what a ‘tache, what a pair of shades) has helpfully shot the controls of the plane (why?), we are treated to a genuinely epic freefall chase scene. There is a tantalising account of the filming of the scene here – tantalising because you can’t read the whole article for free, and the relevant paper back issue of American PornCinematographer costs US$75!

However….I was perturbed by Chris’s reasoning about Jaws catching up with 007 because he’s a bigger and heavier guy. Oh dear Chris. Back to the GCSE Physics lab for you. As Galileo may (or may not) have demonstrated experimentally, but correctly pointed out, objects of differing masses accelerate under gravity at the same rate. So a marble and a cannonball dropped from a plane will hit the ground at the same time allowing for zero air resistance. In fact, the cannonball might get there slightly later, because it offers more drag, since the terminal velocity of an object, as we all know, is given by this formula: 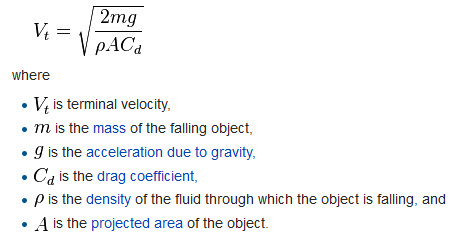 Pinched from Wikipedia? Me? Never. The really cool thing is that a bowling ball and a feather (or a Roger and a Richard) will fall at the same rate in a vacuum – see here.

The terminal velocity of a skydiver facing belly down with arms and legs splayed is about 122 mph. But by adopting a more streamlined shape (as both Bond and Jaws do at different times in the sequence) the skydiver may reach 200 mph. This is why Jaws catches up with Bond (who has been fannying about with Castaldi (deceased) and being very unaerodynamic, then chilling out and saying “phew, that was close”). Not because Jaws is a big fella. Although he is. Very big.With teeth and everything.

A Serbian, Vesna Vulović, holds the world record for the highest survived fall without a parachute – 33,333ft. She was a stewardess on a Yugoslav Airways DC-9 which was blown up by a bomb (or just possibly shot down by Czechoslovak forces) on January 26th 1972. While Jaws did not fall from that high up, is it possible that a big top might have broken his fall sufficiently to allow survival?

The Guinness Book of Records notes Stig Gunther’s 1998 104.5m jump onto an airbag – you can see it here. The commentary suggests he hit the bag at about 90mph – certainly he was not falling for long enough to approach terminal velocity, and my calculations suggest he may have been moving rather slower than suggested – especially given his Jaws-style arm flapping. Not very aerodynamic!

However, Gunther also fell onto an inflated airbag, a little above atmospheric pressure – but probably not much above. Could Jaws have survived in real life? My gut says no – he would probably have ripped through the tent canvas, impaled himself on the internal scaffolding, and still have hit the floor very fast indeed. But then again, he is Jaws, and this is Bond!

There’s a fun (if rather texty and 90s) page all about freefalling (and when it goes wrong) here. Some pretty rad stuff there. Some of it is even coolio.

Thinking ahead (and I know Mission: Impossible and other franchises have taken up the Bond mantle of really ground-breaking stunts these days), why have we not seen any wingsuit action from Bond? These things were invented almost twenty years ago, and there have been jet/rocket powered models since 2010 at least. Maybe we’re just stuck in one of those gritty phases with Danny Boy, and we’ll have to wait for Bond 26 to see a bit of Rogerian fantasy return to the movies.

P.S. one last physics mystery – how do Matthew Grice’s jogging pants stay up in his Moonraker fan video? Even Brian Cox couldn’t answer that one.