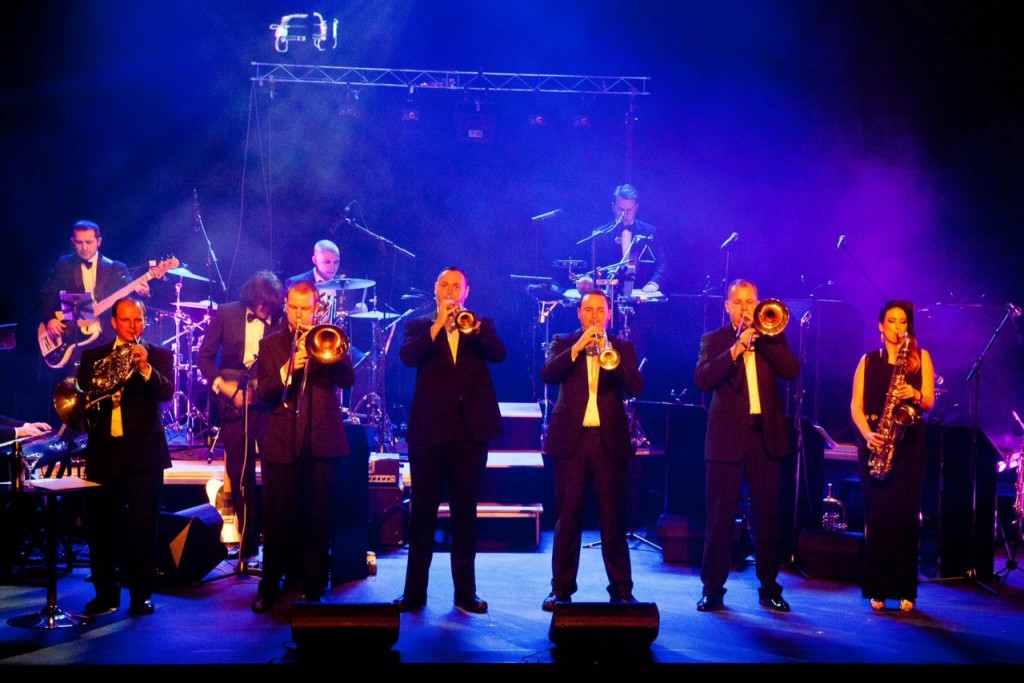 Formed in 2004 by Warren Ringham, the group consists of fourteen performers, two of whom, are the most brilliant singers I have ever seen.

James Bond tribute bands aren’t usually my cup of tea, as they are not a patch on the original tracks performed by the likes of Shirley Bassey, Tom Jones and Tina Turner. Tribute bands generally tend to create the sounds of an orchestra by using keyboards. This type of sound only serves to bring to mind early video games, a touch of nostalgia perhaps, but not for James Bond…however, this is not the case with ‘Q The Music’.

‘Q The Music Show” was outstanding, and the performance from female vocalist, Kerry Schultz, was astonishing. I personally have never seen or heard a singer that could successfully nail the famous Shirley Bassey sound. It couldn’t have been easy for her though, as there were moments when I thought she was going to pass out.   Also we had male vocalist, Shane Hampshire, who performed ‘Thunderball.’ He made a remarkable job of holding the very last note which famously caused Tom Jones to pass out! In fact, I think Shane Hampshire may have actually held the note longer.

With the band consisting of a brilliant brass section, (which is what Bond music is all about), guitar, bass, drums, percussion, keyboard and synthesizers together with the two wonderful vocalists, they have between them, created their very own unique take on the Bond classics. For example, ‘You Only Live Twice’ was given more of a lounge feel, as opposed to the original oriental sound from the film version.

‘The Man With The Golden Gun’ saw guitarist David D’Andrade in his element. He gave Lulu’s song much more of a heavy metal sound, accompanied by the beautiful sound of Kerry Schultz. The way that David played the guitar, can only be described in the same way Xenia Onnatop got her sexual kicks out of killing people! The look on his face just said it all. I was later informed that this was what all guitarists do. My only experience of a guitarist is Hank Marvin of ‘The Shadows’, and the way he plays, is completely different to how David played.

Towards the end of the show David was at it again with ‘You Know My Name’, to which he also lent his voice. In my opinion it sounded just as good as Chris Cornell’s version.

However, it wasn’t just the title songs we heard. The show opened up with Monty Norman’s famous ‘James Bond Theme’ followed by Barry’s own theme, ‘007’.

After the interval we were welcomed back with Marvin Hamlich’s classic Bee Gee’s inspired track ‘Bond 77’ from ‘The Spy Who Loved Me’ and then finally we were given the ‘Q Band’ rendition of Moby’s ‘James Bond Theme’.

The compere, Tim Ames definitely had a ‘Licence To Tell Jokes’, as he introduced each song and told the audience some interesting facts about each of the Bond songs.

As the world’s leading tribute band to James Bond music, you just know that this will be top quality entertainment. ‘Q The Music’, put together by Mr Ringham, consists of some brilliant talent, outstanding musicians as well as amazing vocalists. I feel sure that Marvin Hamlish, Michael Kaman and of course the legendary John Barry, would be proud.

After recently doing a gig in Monte Carlo and soon to be heading off to Dubai, you have to know that this is not an event to miss. If you are a James Bond fan, or a fan of the songs, I would strongly recommend that you see them because, ‘Nobody Does It Better!’