In July of 2015, rumors that Radiohead had been selected as the artists for Spectre’s title song emerged when a bookmaker suspended betting once a customer placed a £15,000 bet on the group through its website. It was thought to be an unlikely match, and many fans no doubt still consider Radiohead to be an odd choice for Bond. Their style of sonic experimentation and cryptic existential lyrics seem a bit problematic when paired with a franchise seeking the kind of blockbuster box office numbers and crossover appeal that Skyfall and its title song performed by Adele achieved in 2012.

By September 2015, however, Sam Smith announced that he had landed the gig of singing the Bond theme, and the rest was history until on Christmas Day in 2015, Radiohead decided to release their rejected song for Spectre.  For Bond fans, the knowledge of rejected Bond themes isn’t anything new.  There have been many rejected themes over the years by many notable artists, but I don’t recall if the release of a rejected theme was ever done this close to the release of their would be Bond film.  Some rejected themes end up as B-Sides (such as Pulp’s “Tomorrow Never Lies”) or get re-worked with different lyrics on their albums (see Ace of Base’s “The Juvenile”).

Radiohead producer Nigel Godrich later lamented the fact that the band took time away from recording their album A Moon Shaped Pool.  From Rollingstone:

“It was a real waste of energy. We stopped doing what we were doing and had to concentrate on that for awhile since we were told it was something that was going to come to fruition. I haven’t seen the movie and I think they ended up with something more suitable for it, but in terms of making A Moon Shaped Pool it caused a stop right when we were in the middle of it.” 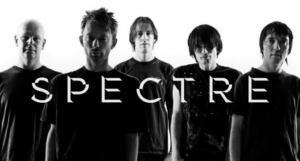 For his part, singer Thom Yorke was far more conciliatory.  On Twitter he wrote:

“Last year we were asked to write a theme tune for the Bond movie Spectre. Yes we were. It didn’t work out, but became something of our own, which we love very much. As the year closes we thought you might like to hear it. Merry Christmas. May the force be with you.”

So, Bond fans got to hear the song that Radiohead wrote and recorded for Spectre.  Reaction was understandably mixed.  For my part I wasn’t very impressed with the song the first time I heard it.  I do enjoy listening to Radiohead, but much of their recent output doesn’t do much for me. I still listen to music from Pablo Honey, The Bends, OK Computer, Kid A, Amnesiac, and Hail to the Thief, but the music on In Rainbows and King of Limbs didn’t really grab me.  I still haven’t listened to A Moon Shaped Pool, but I plan to get around to it at some point.  Overall, I would say I still enjoy the band, but I’m not an over-zealous fan of their music. 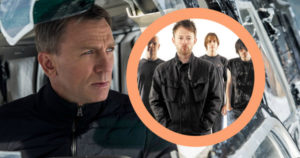 I recently came across a few fan edits that incorporated Radiohead’s Spectre into the credits sequence, and I must say I’ve discovered a newly found appreciation for the song.  When Radiohead first released the song, I hadn’t bothered to look for the lyrics.  I simply listened to the song and moved on like most people. This time, I made a point of finding the lyrics and following along with Thom Yorke’s vocal delivery, and it’s a world of a difference.  For the purpose of this article, here are the lyrics.  Obviously, the copyright belongs to the rights holders. This song was written by Philip James Selway, Edward John O’brien, Jonathan Richard Guy Greenwood, Thomas Edward Yorke, and Colin Charles Greenwood.

“Spectre”
I’m lost, I’m a ghost
Dispossessed, taken host
My hunger burns a bullet hole
A spectre of my mortal soul
These rumours and suspicion
Anger is a poison
The only truth that I could see
Is when you put your lips to me
Futures tricked by the past
Spectre, how he laughs

Now follow along with this edit of the song placed along with Spectre’s titles (this is a Youtube link so apologies if at some point the content gets taken down).

I feel like these lyrics capture the darkness, paranoia, and refusal to trust that’s inherent to the Bond character (at least as he’s portrayed by Daniel Craig).  The song speaks to someone who wants badly to love and care for someone but is restrained and restricted by chance, circumstances, and also just by the nature of his character.  Bond is an assassin who must kill in cold blood at times, and for this he sees himself as an outsider, a “ghost” if you will.  The “spectre” of this song is Bond’s identity divorced from his own humanity.  I think the lyrics really do get to the core of Bond. Upon this re-evaluation, I find the final two lines especially haunting.

Now the film Spectre ends on quite a positive note so I can sort of understand why EON didn’t want an undeniably dark and brooding song as its theme, but seeing as how Craig’s Bond has been dark and brooding throughout his tenure, I find this song more of a fit with Bond’s character than Sam Smith’s song. I suppose if the movie was going to end with Madeline getting killed, Radiohead’s song may have been chosen or perhaps not considering the fact that EON seemed to have at least some desire for their chosen Bond theme to receive an Academy Award nomination.

“Spectre” was actually not the first song that Radiohead submitted.  They previously submitted a song called “Man of War,” which had been recorded as an outtake during both The Bends and OK Computer recording sessions.  This song was rejected by EON specifically because it would not have been eligible for Academy Awards consideration. The song itself is more in line with the kind of music Radiohead was producing at that time. It was finally released in 2017 as part of a deluxe edition of OK Computer. Thom Yorke himself described it as “a homage to Bond themes.”  A music video was eventually made for it and released in June of 2017. First here are the lyrics:

So unplug the phones, stop all the taps
It all comes flooding back
To poison clouds and poisoned dwarves

Radiohead clearly has had an affinity for exploring Bond themes and motifs, and I suppose that seems to be in line with the notion of paranoia that often gets explored in their music.  One need only look to their cover of “Nobody Does it Better” to realize that at the very least Yorke and Johnny Greenwood are fans of the franchise.

Guitarist Johnny Greenwood has also written a number a film scores recently earning his own Academy Award nomination for Phantom Thread. Is it out of the question that perhaps some day, Greenwood might score a future Bond film punctuated with Radiohead as the theme song artist?  Perhaps it is. I’m sure many Bond fans would shudder at the thought, but I wouldn’t be opposed to it if it happened. In a BBC interview, Johnny Greenwood had this to say of Radiohead’s foray into the world of Bond music:

It wasn’t right for the film, what we did. So we thought, “Great! Then it’s ours. We can finish it how it’s meant to be and we can release it.” So that side of it was really positive, you know?

But I guess there’s lots of people interested in who does it [the Bond theme]. There’s a lot riding on it and the song we did was just too dark or whatever, so that’s fine. [It] means we get to have it back and it’s ours and we got to put it out.

We’re really, really proud of it. Why be attached to an old fashioned idea of what a James Bond thing was and it being a big deal? It’s like it’s sort of stupid to get worked up about, really.

Perhaps, that last line might not endear him to Bond fandom, but I get the general notion of what he’s saying.  While I doubt Radiohead or Greenwood’s services will be summoned for Bond 25, I’d like to think somewhere down the line perhaps circumstances will align for the pairing of Radiohead and the Bond franchise once again.