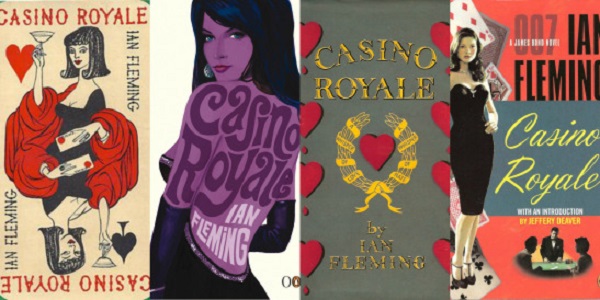 As important as the Bond films are let’s never forget where it all started.  Benjamin Clow takes a look at Ian Fleming’s first novel and provides us with a unique perspective on the literary side of Bond.  What are your thoughts on Fleming’s Casino Royale novel?  Let us know in the comments.  Also, if you’d like to write a review of a Fleming novel, you can email us at contact@toms70.sg-host.com

The still, repetitive silence of the summer holidays can be very boring for a University student. Even worse when the household jobs begin to accumulate and one feels the all too familiar sting of sunburn from mowing lawns all day long. The one thing Benjamin Clow realised he needed, as he gazed out at his Hoagy Carmichael reflection in the bathroom mirror, was a distraction. He needed a blonde-haired beauty, a villainious plot to foil or a hidden hideaway to investigate. Luckily, he knew that if all his efforts for an adventure had failed, he could always turn to a well-written thriller on his bookshelf. He needed a book to cleanse the palate from all those months of elite literary fiction he had to read for his Uni papers. He watched a slight smile appear in the mirror back at him. All he needed was a bottle of ginger beer, enough sunscreen to cover Jill Masterson and a copy of Ian Fleming’s “Casino Royale”. With that, he knew his holidays would soon begin to show promise…

Casino Royale is a must-read for any Bond fan, a strong first novel as well as an exciting introduction to the Bond series. Written in 1953, Fleming’s first novel is very much a time capsule of an era long past. The writing style and description of everything from food to hygiene habits, so alien to the writing of today, is as exciting as ever. This is a short and brutal piece of fiction. Even if you are not much of a reader, you will find yourself turning the pages with considerable ease. One can easily finish this book within one lazy Sunday afternoon, and it’s that easily consumed quality which is part of the novel’s charm.

For first timers to the Bond literary world, it’s important to realise that there are some drastic differences between Fleming’s Bond and the Bond of the movies. There are of course exceptions, but the films became something of their own. Here at the beginning of the series, Bond does not drive a DB5’s with an ejector seat. There are no invisible cars or side whistles either sadly. Don’t despair film fans as there is still enough of the James Bond character in this novel who we all know and love. Bond loves motorcars, he says his last name first, and orders his drink with almost pedantic strict instructions.

Our favourite secret agent still has a keen eye for women, as his relationship with the first ever Bond girl, Vesper, is one of the strongest aspects of the book. That’s because we hear Bond’s own thoughts shine through. Nothing like a romantic story to make us connect with the main hero.

What always struck me as interesting was the tale of how Fleming chose the name of James Bond. Stolen from a Bird-watching books because it was suitably bland and uninteresting. Bond was meant to be a boring, blunt instrument, to whom exciting things happened. Reading Casino Royale in today’s world, I don’t think Fleming achieved this.  Bond’s love of rich food, his post-war perspective and his thought by thought decision making really adds up to make a unique character who is not bland or boring at all.  Bond swears, smokes and makes mistakes. He likes caviar, avocado pears and ice-cold showers. He is action-oriented, sometimes rude but always likable. Bond doesn’t actually kill anyone in Casino Royale, but we do not doubt the fact that he would without hesitation.

The other characters in Casino Royale come across like cards in a deck, shuffled and played as tools of the literary craft.  They are still compelling here even if they do feel like they are ‘used’ rather than expanded upon.  Bond’s confrontation with the villain is always a trope I expect and enjoy in the series. Le Chiffre and Bond don’t talk for most of the novel, allowing the baccarat game itself to rise the tension. It’s in this way that the characters seem secondary to the simple but engaging plot. Yet when they do finally talk, it’s during the torture scene, but once again we focus more on Bond,  Le Chiffre feels like nothing more than a plot device. We know his plan from the start, recover Soviet funds through gambling, and apart from playing baccarat and torturing Bond, he doesn’t have much to say or do. What I do like, is Fleming’s description of  Le Chiffre as a ‘Minotaur’. Suggesting that the defeat of Le Chiffre is almost a mythic quest for Bond to complete. He has his very own labours, like Hercules. Yet Fleming never paints our hero as perfect, he smokes too many cigarettes, drinks an awful lot and has bouts of anger. This prevents him from being the perfect white knight defeating the evil dragon. When both Le Chiffre and James Bond clash heads, we are not suppose to judge them as people but as pawns of their respective governments. We will have to wait for other Bond novels for villains and confrontations which feel like titan against titan.

What I personally love about the writing style of the novel is that it appears to be deeply influenced by Fleming’s war time experiences and journalistic background.
His great knowledge and attention to detail in the espionage areas of the book clearly come from his background in Naval Intelligence. His depiction of alcoholic beverages and expensive food come from his own personality and lifetime of experience through the wartime and post wartime eras.

Fleming’s dead-pan simplicity in describing events can be a real breath of fresh air. If someone gets shot or blown up, we are told matter of factly. I think this comes from Fleming writing for newspapers rather than out of an attempt to impress the literary elite.

We never question the passion Fleming has of his subject matter.  He is a man very much living in the world he has created. We have a lengthy description on the rules of baccarat, details on Bond’s eating habits and moments when Bond’s personality and thoughts seem to take over the narration.  It’s easy to believe that Bond is based on the author himself rather than anyone else.

It’s easy to conclude that his best writing is when he focuses on Bond, rather than on anyone else. Bond’s owns thoughts add to the darker and tragic moments of the story. Notice how Bond “sees luck like a woman” and after surviving a near death experience  Bond sits down and “enjoyed being alive”.  Fleming’s worst moments sadly, are his descriptions of other characters in the story. Bulgarians are described as subhuman and Bond’s view on women as only useful for ‘recreational purposes’ bothered me, but luckily did not impact my overall enjoyment of the novel. I guess for the passages which don’t seem to age well its best to view them as realistic depictions of that time in history instead of focusing on any social or political views which might detract from your enjoyment from the novel.

One thing I’ve had to learn the hard way is the problem of under-reading. It’s so easy to read and not read at the same time. We can so often skim each sentence while we’re reading and only take out the smallest points which help move the plot along. Sometimes I feel like we need to give Fleming more credit for his work, slow down and linger with his words a bit more. The opening passages to Casino Royale, where we hear about the ‘smoke and sweat’ of a casino, is an invitation. A door opening to another world, full of Baccarat tables, excessive alcoholic drinks and beautiful women. Whether you are a first time reader, or back for the hundredth time, James Bond still carries that weight of relentless but relaxing escapism.