Oh dear. My mind clearly needs better things to do. Tom’s idle musing in Moonraker Pt The 2nd about which would win in a fight, a shark or an alligator, set me thinking. My first port of call was a cool illustration (see below) I remembered from Willard Price’s classic 1972 children’s book, Cannibal Adventure. Plot doesn’t really matter (a bit like certain Bond movies I could name), but basically there’s an epic Tiger Sharks v. Saltwater Crocodiles mega-battle death-match near the end – very much like a fishy-reptilian Thunderball battle sequence. The crocs won. Realistic? I wonder…

Of course, there’s more to it than idly musing over a theoretical Top Trumps pack here. We need to examine the generalities, as well as the Bondian specifics. First of all, let’s think modern day ultra-fight: let’s put up an Australasian Saltwater Crocodile (Crocodylus porosus) against a Great White Shark (Carcharodon carcharias).

First, the croc. To quote a well-known online source (only the best research backs up these blog posts), “this species is the largest of all living reptiles, as well as the largest terrestrial predator in the world. The males … can reach sizes up to 6.3 m and weigh up to 1,360 kg”. These guys are nasty if you get into a fight with them: big bulls can exert a bite force of over 30,000 Newtons! Now I’m no expert on scientific measures of force exertion expressed specifically as how many kilograms would be accelerated at 1 meter per second each second given the exertion of a particular force, but 30,000 is a big number. And big teeth too. Sharp, as well. They are not bright – their brains comprise about 0.05% of their body weight (in humans it’s about 2%) – but they are epic. They’ve been known to catch and kill horses, bulls and even a tiger!

On the other hand, the Great White Shark can grow “up to 6.4 m in length and 3,324 kg in weight”. So about as long, but much heavier – sharks never have to lug themselves about on land, after all. A notorious and genuinely deadly predator, Great Whites are nevertheless much less of a threat to humans than widely thought – a certain 1975 Spielberg movie has a lot to answer for. (By the way, Mr Chris Wright, did you know that the Bond henchman “Jaws” got his name partly from a film about sharks? And that Bond henchman Tee-Hee has a metal arm? No? Well, you learn something new every day.)

So which would win in a fight? Dunno really. I guessed croc. But what do I know? Luckily, there are people with nothing better to do than create imaginary battles between deadly animals in bad CGI for Animal Planet, and so I give you the correct answer. It’s the shark. But then again, maybe the croc would win. Who knows. Here’s an alternative correct answer.

But we could delve deep back in time, not just to the days before Sean wore a syrup (Google it, non-Cockneys), but to the fossil past, when mega-crocodilians and giant über sharks roamed the oceans. Well, not at the same time, but never mind that. It’s not like Largo could actually have had a fight with Tee-Hee, is it?
Sarcosuchus crocs were around in the early Cretaceous period, over 100 million years ago, and measured up to 11.6m long. Ouch. Check out the graphic below comparing a Sarchosuchus skull to a modern Nile croc. Gulp. 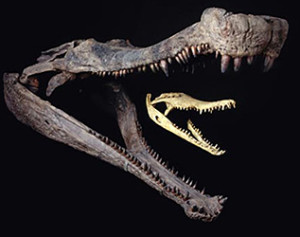 But Megalodon, the biggest predatory shark known, reached up to an eye-watering 18m long! Sadly it never met a Sarcosuchus in real life, having lived some 100 million years later. But that won’t prevent some nerdy sadster thinking about the fight. Oh no – once again I don’t have to: it’s been done before. 2010’s blockbuster that no-one has heard of, Mega Shark vs. Crocosaurus has an elaborate plot, summarised on IMDB as follows: “A megalodon battles with a crocosaurus causing massive destruction. The US Army has to try and destroy the havoc creating monsters.” Well that’s clear. I for one am not going to watch the movie to find out which one wins, but given that Mega Shark had already emerged from two previous death matches, against Giant Octopus and Mecha-Shark in prequels in 2009-10, my money is on Crocosaurus going down. Go Mega Shark.

The real question is, however, the Bond-specific one. Which would win out of a fight between (let’s say) Largo’s sharks and the Louisiana alligators? (Alligators are crocodilians, if not technically crocodiles.) I pick Largo’s sharks as the original Bond sharks simply because they are the most iconic, are the only ones of which I can be certain of re identification (Tiger Sharks), and because…. er…. Thunderball and…. er…. Domino’s swimsuit.

The truth is I have no idea, and I don’t really care. I think this one should probably go out to a listeners’ vote. Now, if the sharks had lasers mounted on their heads, and the alligators had magnetic claws….
In reality, the final word must go to Google. It’s unbelievable how much shark/croc action (even real life action) or imagination there is out there. Here’s just a small selection:

P.P.S. Chris – pretty sure that’s not a Python in Moonraker – we’re in Brazil, so it really ought to be an Anaconda.