Some Kind of Hero – Book Review by Jack Lugo 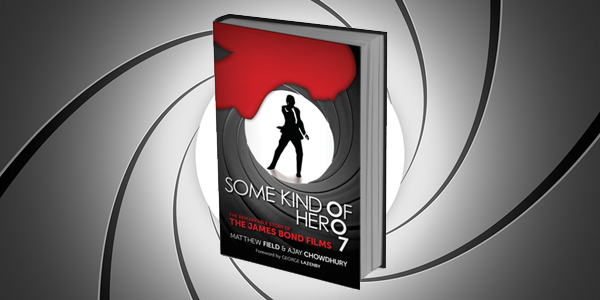 With its meticulous research into the history of the Bond film franchise and close attention to many of the franchise’s little known details, Some Kind of Hero is the ultimate nonfiction book for Bond fans.  Authors Matthew Field and Ajay Chowdhury conducted over a hundred interviews with noteworthy participants in the Bond film saga, uncovered countless little known facts, shed light on many of the franchise’s unsung heroes, and poured years of research into a well-crafted epic tome.  It’s a worthy addition to anyone’s library whether you’re a hard core Bond fan familiar with the franchise’s history or a casual fan looking to read and learn more about the Bond phenomenon.

The only thing that would have cemented this book as even more definitive would have been an interview with Sean Connery himself.  Rest

assured, the authors landed interviews with every other Bond actor and then some. Connery, however, has become notoriously elusive in recent years. Although he has been seen a number of times in public, I imagine it would be a challenge to land an interview with him particularly if the sole topic was to be about Bond and not say Scottish independence.  The authors recount their efforts to get an interview with Connery in the Introduction and they did in fact come very close.  I suppose an in-depth interview with Connery relating his side of the story in regards to his experience as 007 might make for a book of its own.  Even without Connery’s participation, I think the authors did a fantastic job of informing the readers about many of Connery’s concerns and issues with the franchise as well as the producers without necessarily taking sides.

The personalities of Cubby Broccoli and Harry Saltzman permeate this book.  In fact, I feel I have better sense of who those two individual men were as people than I did before reading it.  Each of these men whose names have become synonymous with the James Bond film franchise has an early chapter devoted to them before the main crux of the book continues with a chapter devoted to each Bond film.  As the narrative unfolds, the authors impart many subtle details and personality traits of each of these men along with the roles they took on as the partnership progressed.  There are quirky details like Saltzman’s unenthusiastic reaction to Paul McCartney’s condition that he be the one to perform the song he wrote for Live and Let Die when Saltzman would have preferred Thelma Houston.  Prior to that Cubby Broccoli described Ian Fleming’s disappointment at having had his meal pre-ordered for him at a restaurant in Turkey. The most fascinating chapter, however, is devoted to the ultimate breakup of their partnership after The Man with the Golden Gun.   The complex details concerning the dissolution of their partnership are explored in a chapter the authors call “Two Scorpions in a Bottle – Broccoli vs Saltzman.”  Here, we learn from Harry’s son Steven that film title designer Maurice Binder served as a “back-channel” between the two producers when they were most at odds.  We also learn a great deal more about the circumstances that led to Harry Saltzman being forced to sell his shares and controlling interests to United Artists.

Some Kind of Hero also gives us a very compelling look at some of the unsung heroes in the Bond franchise.  Of particular note is Johanna Harwood whose screenwriting contributions remain largely unrecognized within Bond fan circles.  The authors were lucky enough to sit down for an interview with Harwood, who has not frequently spoken publicly about her role in the Bond saga.  She enters the

story as Harry Saltzman’s assistant but her actual role was to write scripts. She described Saltzman’s personality at one point saying, “[His] big fault was that he was tactless. He was always rubbing people  up the wrong way because he was saying things, unkind things but he wasn’t actually unkind.  He never thought this might upset this person . . . He was an extraordinarily good salesman.  If he had one really big quality, I would say it was he could sell anything.  He could go off with an idea and sell it to anybody. What he couldn’t do later was develop the idea.”

Saltzman first tasked Harwood with writing synopses of all the Ian Fleming books and it would appear that Harwood did a considerable amount of work prior to Richard Maibaum coming on board submitting her own scripts and developing early adaptations of Fleming material.  She even wrote her own Bond short story called “Some Are Born Great.”  Harwood went on to receive screenwriting credits on Dr. No and From Russia with Love but her work on Goldfinger remains uncredited.  Although many of her contributions may have been changed by subsequent writers especially on From Russia with Love, the authors of Some Kind of Hero have done Bond fans a tremendous service by getting her story down and shedding light on the important role she played during the creative process of those early Bond films.  Harwood also co-wrote EON’s early non-Bond movie during the sixties called Call Me Bwana.

Also of note are some of stories the authors have uncovered which have garnered media attention over the past several months.  First there was the story of how Amy Winehouse might have done the theme song for Quantum of Solace were it not for her untimely death.  David Arnold had “sketched out” some musical ideas leaving the lyrics for Winehouse to complete.  The authors were also able to get Pierce Brosnan to unleash a few more details about his departure as Bond. Brosnan describes the phone call he received after his agent informed him that negotiations for him to star in his fifth Bond film had stopped.  Brosnan told the authors that he “was utterly shocked and just kicked to the kerb with the way it went down.”

All in all Some Kind of Hero reads very swiftly despite its rather thick appearance.  Although the book clocks in at over 700 pages, the main narrative is actually just over 600 pages with the notes and index taking up the last 100 pages.  It could be read either from start to finish or one might decide to read chapter by chapter as you watch the films chronologically. I’m glad to have read it once all the way through, but I could easily see myself returning to Some Kind of Hero as I re-watch the Bond films re-reading each chapter that corresponds to whichever film I decide to put on.  I feel like this book tells the story about the key people involved in the Bond saga better than most books on the subject.  You get a real sense of the personalities involved, the various conflicts that ensued, and a rationale behind many of the decisions that were made.  Each chapter in the Bond saga is given its due and although it’s obviously way too vast to convey the entire scope of this book into one review, it’s safe to say that I believe most Bond fans would benefit from reading Some Kind of Hero regardless of how well-versed they believe themselves to be regarding the history.