This Week in James Bond: Bond retrospectives and reunions, Daniel Craig and Eva Green, and kissing 007 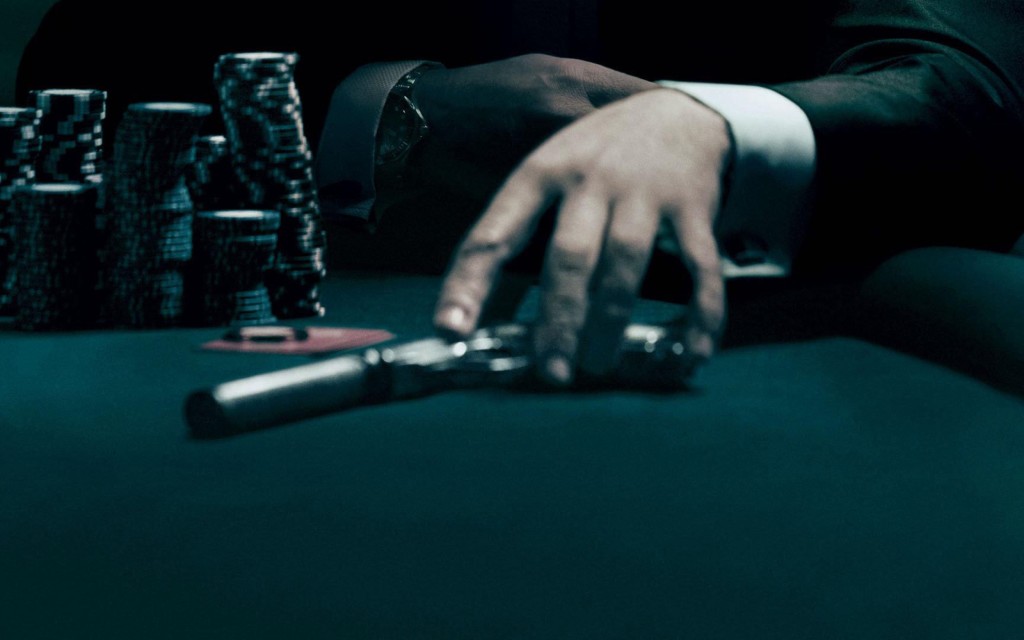 Welcome back to “This Week in James Bond”, returning to your computer/smartphone screens after another brief hiatus! News from the world of Bond has been rather sparse in the last few weeks but hopefully we shall witness a new wave of SPECTRE marketing and promotion as the summer movie season begins.

In SPECTRE news, it appears filming is almost wrapping up in Austria as an image of the entire film crew posing together for a photograph surfaced online some time ago.

A new and relatively nondescript image of Dave Bautista as henchman Mr Hinx was also released by the good folks at EON on 30 April alongside a new videoblog (mild spoilers in this videoblog, do not watch if you are trying to remain 100% spoiler-free); the image immediately went viral on various social media platforms. JBR listeners may recall that this website was the first to break the news back in late August of 2014 about casting for a new henchman for the then-untitled 24th James Bond film. 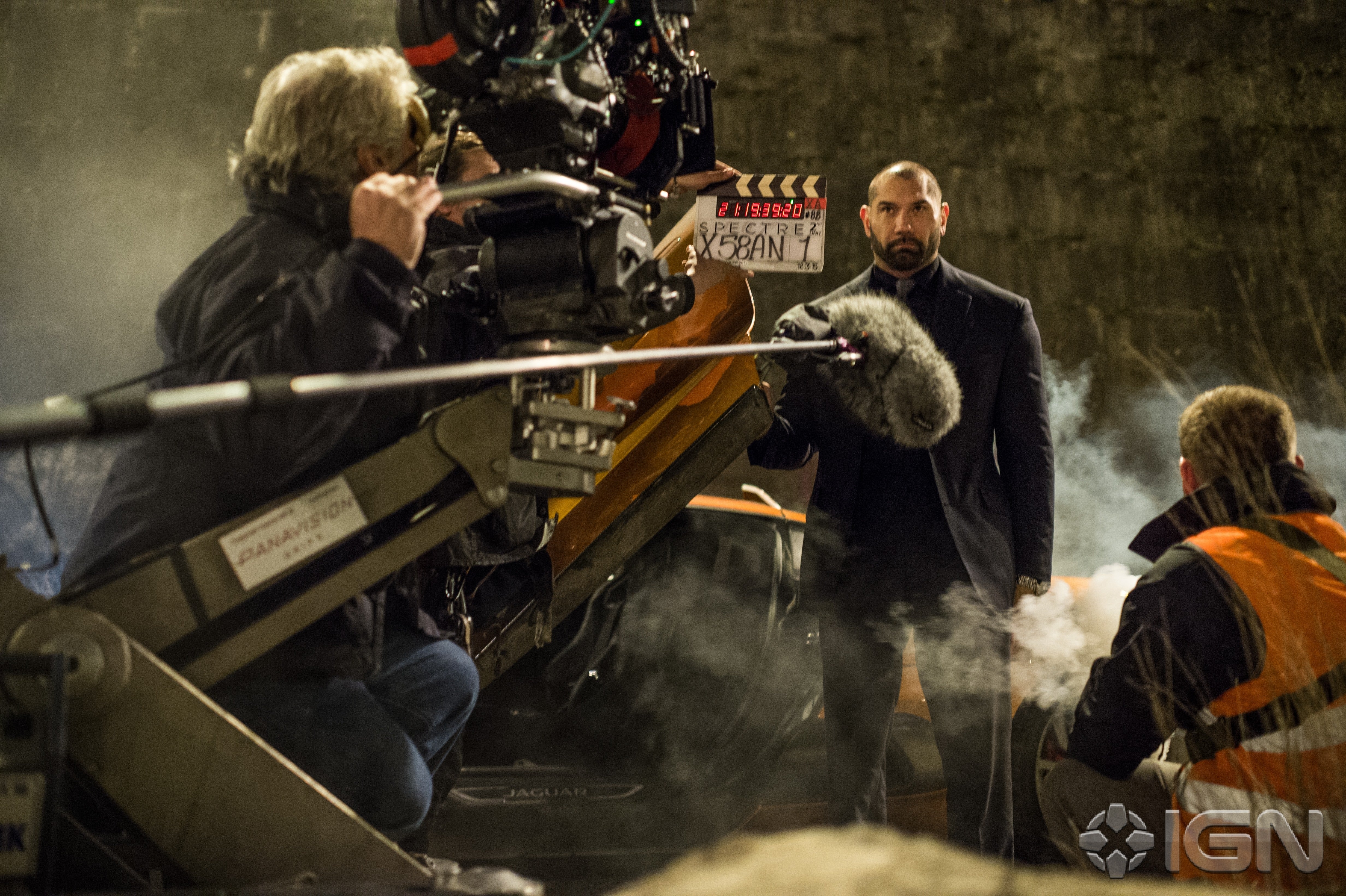 Sony Pictures also released some new exclusive footage at CinemaCon 2015 on 22 April, shown only to the various members of the press who were present. Detailed summaries of said footage immediately appeared on various entertainment websites shortly afterwards. Your humble correspondent respects the wishes of fans who are choosing to remain as spoiler-free as possible prior to the release of SPECTRE, and thus will not be releasing any plot details here. However, I think it is safe to reveal that the exclusive footage included (among other things) a longer version of the exchange heard in the teaser trailer between Bond and Moneypenny, as well as brief glimpses of other scenes including a few stunts, Ralph Fiennes, and a sexy exchange between Bond and Lucia Sciarra.

(Source: ComicBook.com, Empire Magazine, IGN, and Variety – spoilers within, read these at your own risk)

Barcelona repertory cinema to hold six-film 007 retrospective in May

One of the best things about a Bond year, in my opinion, is that cinemas often celebrate the release of a new Bond film by showing older ones. Your humble correspondent had the pleasure of attending a 007 retrospective here in Vancouver prior to the release of Skyfall in 2012.

The Phenomena Experience repertory cinema in Barcelona, which purports itself to be “the ultimate cinematic experience”, has recently announced that it will be showing six James Bond films (one from each actor) in the month of May – all in either their original 35mm print or a newly restored 4K version. At this time of writing, the first two films in their retrospective (Thunderball and Licence to Kill) have already been shown, but JBR listeners who happen to be in or around Barcelona this month should definitely check out one of the remaining four.

Tickets for these screenings and others are available for purchase here.

Former Bond girl Jane Seymour spoke briefly to NPR on 3 May about her time as part of the extended Bond family in 1973’s Live and Let Die. Seymour recalled her very successful audition for the role of Solitaire, in which the producers hired her on the spot:

“I was wearing a coat with a fur collar and a fur hat, the idea being to keep my hair off my face and then when I took the hat off, my hair— which was very long and I sat on in those days — came tumbling down.”

Seymour also discussed the scene in which Bond and Solitaire, fleeing from Kananga’s henchmen, drive a double-decker bus around San Monique; the top of said bus gets sliced off by a overpass, and Seymour reminisced about physically sitting in that bus as its top was sliced off. Watch that scene here.

I really became very good friends with the stuntmen … The idiots put me in the bus. I mean, Roger [Moore] wasn’t there, no one else was there … It could’ve been anybody could have played that. But I was in there and I said, ‘Have you done this before?’ And they went, ‘No, we did it mathematically. We hope it works. Action!’

In the last installment of TWIJB, your humble correspondent shared a video that Daniel Craig recorded for International Mine Awareness Day. On 14 April, UN Secretary-General Ban Ki-moon announced that Craig had been designated as the first UN Global Advocate for the Elimination of Mines and Explosive Hazards:

“Along with moviegoers worldwide, I have been on the edge of my seat watching Mr. Craig, as James Bond, defuse ticking time-bombs with seconds to spare. I am even more excited that Mr. Craig has agreed to use his star power to draw attention to the noble causes of mine destruction and mine awareness. As 007, Mr. Craig had a ‘licence to kill’. Today we are giving him a ‘licence to save’ … The United Nations is playing a vital role in freeing the world from the threat of mines and explosive remnants of war. I welcome the support of Mr. Craig to work on these issues. I count on his advocacy to make a difference.”

In his new role as a Global Advocate, Craig will be helping promote public awareness and raising support, both politically and financially, for UN mine action efforts. He said briefly:

“The use of improvised explosive devices in Iraq, Somalia and Mali; the widespread use of ‘barrel bombs’ in Syria, and the landmine contamination in Cambodia, Colombia and Afghanistan must all be addressed simultaneously. It is a big job. The United Nations needs political and financial support to succeed.”

Craig also recorded a brief video on 30 April encouraging viewers to help victims of the recent earthquake in Nepal by donating to the Disasters Emergency Committee.

In other philanthropic James Bond news, actor Colin Salmon (Charles Robinson from Tomorrow Never Dies, The World Is Not Enough, and Die Another Day) will be participating in the celebrity all-star basketball charity event known as Hoops Aid on 10 May at the O2 Arena. The event aims to raise money to create more sporting opportunities for disabled and otherwise disadvantaged youths in the UK.

Eva Green on playing Vesper and her favourite Bond girl

Former Bond girl Eva Green was interviewed by The Independent (Ireland) – the actual interview is hidden behind a paywall, so I’ve linked to a transcript of it on an Eva Green fansite instead – while promoting the second season of Penny Dreadful, which also stars former Bond actor Timothy Dalton (with John Logan and Sam Mendes working behind the camera). She spoke briefly about her experience playing James Bond’s first love in Casino Royale.

“People always recognise me as Vesper from Casino Royale and I am very, very grateful and proud of that role. It was a nice love story in Bond. She was the only one he ever loved and always looks quite cool.”

Green has spoken in the past about being forever associated with the role of Vesper Lynd, as in this interview with GQ (UK) from March 2009 (reprinted April 2011):

“Daniel [Craig] belongs to England now and for many people he is Bond. Just as I am Vesper as far as a lot of people are concerned.”

“… my favourite Bond girl I’d have to say is Judi Dench! She broke my heart in Skyfall.”

While promoting her new ITV miniseries Home Fires, actress Samantha Bond spoke briefly about her time in the role to the Daily Mirror on 3 May, admitting that “men of a certain age will get dewy eyed” when she is recognized on the street as Moneypenny. Bond also claimed that she did not think it would be a role she would be forever associated with.

“I’d never seen a Bond film in a cinema and I had no idea of the scale of what I was getting into. I didn’t know it was a global thing. I thought he was just a British spy person.”

Bond also claimed that Pierce Brosnan was a better kisser than Sean Bean. She infamously locked lips with Brosnan in the penultimate scene of Die Another Day involving Moneypenny’s use of a virtual reality simulator, but some JBR listeners may not be aware that she starred alongside Bean in an acclaimed 2002 West End production of Macbeth.

And finally, in attendance at the lotsofcharity.com Remarkable dinner in London’s St Pancras Renaissance Hotel on 29 April were none other than two Bond legends: the aforementioned Pierce Brosnan, and Dame Shirley Bassey. Another new poster for Brosnan’s upcoming action thriller Survivor was posted the day afterwards, on 30 April. In the last installment of TWIJB, we showed you the first poster for the film.