Trigger Mortis: A Rational Look at the Anthony Horowitz Controversy 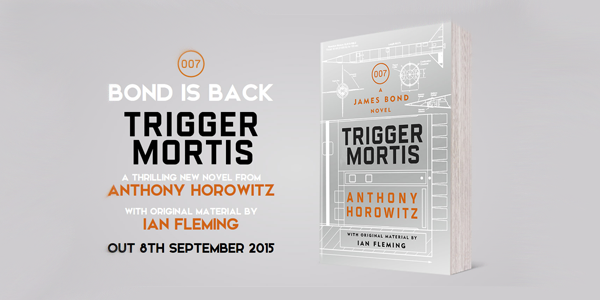 Anthony Horowitz’s recent interview in the Daily Mail has sparked a media firestorm for all the wrong reasons. Initially, Horowitz’s interview had been cited for his negative opinion of Skyfall and because he felt that Daniel Craig’s portrayal of Bond had become progressively “weak” after Casino Royale although he does note that Craig is a “terrific Bond.” Within the Bond fan community in various forums and social media pages; this is what had become a topic of debate until a more controversial quote began making headlines around the world. I started noticing various media outlets singling out a single line from the interview. When asked his opinion about Idris Elba potentially taking over the role as Bond, Horowitz replied, “Idris Elba is a terrific actor, but I can think of other black actors who would do it better.” He then suggested Adrian Lester as a black Brittish actor he’d prefer in the role of Bond rather than Elba. Okay, that statement alone wouldn’t be enough to ignite the kind of outrage that followed, but then the article quotes Horowitz as saying,

“For me, Idris Elba is a bit too rough to play the part. It’s not a colour issue. I think he is probably a bit too ‘street’ for Bond. Is it a question of being suave? Yeah.”

On Tuesday September 1st 2015, the internet simply blew up in a fury of self-righteous indignation mostly because the media outlets who ran their stories singled out that one quote from the interview implying that Horowitz had been against the casting of any black actor as Bond when in the very same interview he suggested Adrian Lester and clearly wasn’t against the idea of a black actor playing Bond at all. He just wasn’t keen on Elba being selected as a Bond actor. The problem arose because of his regrettable usage of the word “street” to describe Elba. Idris Elba is a respected, talented, and highly lauded actor who many feel exudes all the essential qualities we look for in a Bond actor. To describe Elba as ‘street’ was rather uninspired and inappropriate although I’m not sure that the term carries the same connotations in the UK as it does in the US. Here, calling someone who identifies as an ethnic minority “street” is the equivalent of calling them “ghetto,” “savage,” or “thug”, derogatory euphemisms that imply an insult using coded racial terminology. Often times, if someone wants to say something racist without actually saying something racist, they might use such codified terms to avoid being held responsible for holding racist views. It’s a kind of double talk that people engage in when espousing views that are clearly politically incorrect. Most people have that one family member (typically of an older generation) that might get away with talking this way because no one pays him any mind and we may not want to engage in a battle of words that will result in ruining a family dinner.

Anytime a public figure uses such terminology, the media will often pick up on it resulting in the embarrassment of said public figure and most of the times deservedly so. As citizens of a democracy we desire and strive to live in a society free of bigotry of any kind. In this case, however, I don’t believe the outrage at Anthony Horowitz was warranted. In the apology that Horowitz tweeted, he clarified that he was thinking of Elba’s “gritty portrayal of DCI John Luther.” I believe this to be a case of Horowitz choosing the wrong word to describe Elba not because he was using codified racist terminology, but because he genuinely felt that Elba had characteristics aside from race that he didn’t necessarily associate with Bond. If you read the interview, the topic of Elba playing Bond wasn’t the focus of the article. The main point of the article was for Horowitz to talk about his experience writing the new Bond continuation novel, Trigger Mortis. The question about Elba was somewhat inconsequential, but Horowitz offered his honest opinion, which essentially didn’t preclude the possibility of a black Bond actor. Horowitz’s response comes across as off the cuff and flippant because he probably wasn’t expecting to have to give a thoughtful considerate answer to that particular question concerning the prospect of Elba playing Bond.

I think many can relate to the experience of being put on the spot about an opinion. You may have an opinion about something, but without taking the proper amount of time to consider how to vocalize that opinion, what might come out on the spot may not be as thoughtful or considerate had you thought about the verbalization of that opinion especially when it comes to its word choice. I believe that this is what most likely what happened in the Horowitz interview. Horowitz clearly held the opinion that he wasn’t keen on the prospect of Elba as Bond, but when pressed to vocalize the reasons why he made the unfortunate choice of using the word “street” to describe Elba. The word choice was clearly wrong and inappropriate regarding Elba but it doesn’t appear to come from a place of bigotry, racism, or hatred.

Unfortunately once something is in print, it’s impossible to live down or disassociate from such a poor word choice after it has offended and caused as much outrage as has been the case here. I don’t know Anthony Horowitz personally, but I believe when he says in his apology that he was “mortified” by the offense his comments caused. What doesn’t help is that the media outlets picking up the story often run with the “street” quote as the headline and even if one were to read these click bait articles, they spin the comments in such a way as to inescapably arrive at the conclusion that Horowitz is racist. The media has a long history of taking comments out of context and putting whatever the most salacious spin on it possible to bait readers. It’s unfortunate such incidents like this occur not because it underlines much of the racial tension that still exists in our society despite decades of progress but because there are real incidents of racism that happen every day that don’t get picked by the mainstream media and don’t end up trending on twitter. By making Anthony Horowitz the latest lightning rod because of frivolous comments that were made off the cuff, the media is actually diverting attention away from real instances of racism and discrimination. This actually ends up trivializing many of the actual struggles that real people must go through when they encounter racism in their lives whether it’s been propagated openly, covertly, or institutionally.

I believe that diversity is a good thing. As a Bond fan I believe that one day we will see a black actor take over the role whether it’s Idris Elba or not. For now, I’m happy with Daniel Craig’s portrayal because I believe he personifies many of the characteristics that Fleming imbued in the Bond character. He’s the first Bond actor to truly tap into Bond’s emotional life, which Fleming had done in the books. I disagree with Horowitz about his assertion that Bond shouldn’t have doubts or be a deep feeling person because in the books Fleming clearly makes him a flawed man who is also prone to melancholy especially after having his heart broken. Casino Royale may end with Bond saying “The bitch is dead” in regards to Vesper but does he actually feel that way or is it that he convinces himself to feel that way? In On Her Majesty’s Secret Service, we see Bond deal with the death of Tracy:

“’It’s all right.’ He said in a clear voice as if explaining something to a child. ‘It’s quite all right. She’s having a rest. We’ll be going on soon. There’s no hurry. You see’ – Bond’s head sank down against hers and he whispered into her hair – ‘you see, we’ve got all the time in the world.’”

Fleming was clearly not above demonstrating just how much Bond actually felt emotionally in his inner life. He doesn’t spoon feed this aspect of the character to the reader, but there’s plenty to read into this if you deconstruct the character. I think Daniel Craig is the first Bond actor to truly tap into the emotion of the character.

If Daniel Craig were to retire after SPECTRE, I should hope that the next Bond actor be capable of tapping into every facet I enjoy about the character. I don’t believe that race should be a factor at all because the Bond cinematic franchise is always about placing the character in the current day and in the present moment. As I’ve written before, unless the intent is to move towards literal adaptations of the Fleming source material, there is no reason why skin color should matter at all when selecting the next Bond actor. What matters is that he be attractive, agile, and charming while exuding an air of sophistication and refinement. Unlike Horowitz, I believe that Idris Elba has all the essential qualities I’m looking for in a James Bond actor. I just think it’s important that everyone realize that just because you may disagree with someone doesn’t mean that they are a racist. I wish people were more careful about throwing that term around.