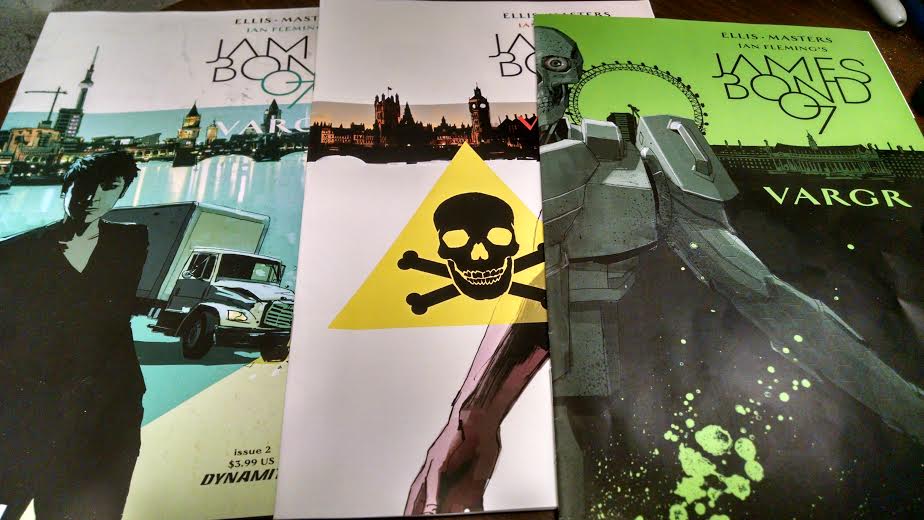 For my review of VARGR Issue #1, please click here.

When we last left Bond after Issue #1, he was headed to Berlin to investigate the origins of a new dangerous narcotic drug that has now reached the streets of London.  Both M. and Tanner briefed Bond on a mission and sent him off to pursue a lead given to them by Felix Leiter, an informant named Slaven Kurjak who happens to be a wealthy Serbian doctor with a formidable reputation in prosthetics and genetic development.  Due to a new law enacted by the UK stipulating that British agents could not carry guns within the UK, Bond must commence his travel to Berlin unarmed.

When he arrives, he’s greeted by a mysterious woman named Dharma Reach, who tells him that she and her driver will take him to Berlin Station. Bond is instantly attracted to her and quite expectedly lays on his classic charm although he also notices that something appears to be off about her.  Something is strange bout her hands.  She wears thick black leather gloves, and Bond notices that the grip of her hand feels “armored” or “weighted.” As I read this I couldn’t help but think of Dr. No’s hands.  Dharma then tries to kill Bond by seducing him in the back of the car using her armored hands to choke him, but Bond fights her off causing the car to veer out of control and crash into an oncoming truck.  Bond survives the ordeal although Dharma escapes.

Bond gets himself to Berlin station to meet up with his real allies before heading over to meet Slaven Kurjak at an experimental prosthetics laboratory. We learn that Kurjak also lost an arm and a leg in the Serbian concentration camps and now wears the same “powered prosthetics” he seems to be developing. It doesn’t take long for the reader to figure out that there must be some

kind of link to the woman who attacked Bond earlier given the presence of the same kind of prosthetic limbs in both Dharma and Kurjak, the supposed informant.  Something most certainly seems off and as we see Bond walk past one of the glass enclosed rooms on his way out of the laboratory, our suspicions are confirmed. Dharma emerges behind a muscular man who appeared at the end of issue #1, a henchman afflicted with anhedonia named Mr. Masters with orders to kill Bond. Much like Renard in The World is Not Enough, Mr. Masters’ condition leaves him with the inability to feel pain or even pleasure when we later learn that Dharma and Masters are also lovers.

In Issue #3 we learn that both Dharma and Mr. Masters work for Slaven Kurjak, who has just sent Bond into a trap by telling him that the drugs are being manufactured out of a garage run by members of the Al-Zein Clan, who happen to be a powerful European

criminal cartel.  Kurjak has Masters and Dharma follow Bond to finish him off in the unlikely event that Bond makes it out of the garage alive.  Of course, we all know 007 doesn’t die very easily as we are treated to a really fantastic action sequence featuring Bond eliminating all the Al-Zein Clan members in the garage despite being outgunned and outnumbered.  He sleekly maneuvers himself around various scaffolding to get leverage on each member kicking over boxes and eventually gunning them all down.

Dharama informs Kurjak who now says that he is activating condition “VARGR,” which seems to consist of killing not only all of his workers at his laboratory but also killing everyone over at Berlin Station.  Mr. Masters heads over and ambushes all of Bond’s Berlin Station allies leaving us to wonder what Kurjak’s scheme could possibly be that would lead him to such drastic measures.

Issue 4 starts with Mr. Masters greeting Bond very much reminiscent to how Red Grant greeted Bond in From Russia with Love.

Masters attempts to earn Bond’s trust the same way Dharama did, but it doesn’t take long for Bond to figure out that something is off about him as well.  Bond uses his cell phone and tells Masters that he’s making a personal call to ward off Masters’s concerns about Al-Zein tapping all the phones.  Of course Bond is really speaking to Tanner and M. using discreet language to inform them of the status of the mission pointing them to “my cousin’s friend.”  In this case, the cousin is of course the CIA and Leiter and the friend is Kurjak, the supposed informant.  M. also informs Bond that the cocaine that had been causing problems in London had been altered or synthesized in some way to also carry a highly infectious disease.

Masters leads Bond back into Kurjak’s laboratory where everyone working there has been slaughtered. Bond tries to get the jump on Masters but Masters is able to counter Bond easily because he is impervious to pain.  No amount of punching, stabbing, or

kicking could possibly overtake Masters until Bond happens upon a hypodermic needle and some oxytocin.  Just as Masters is about to finish Bond off, Bond injects the needle into the back of Masters’ thigh and plunges the drug into his system.  The highly concentrated dose stimulates the dopamine levels and leaves Masters helpless.  Bond interrogates Masters only to find out about some project named “VARGR” before administering a lethal dose of oxytocin into his neck.   He then turns around to find Kurjak standing behind a plated glass partition, which he quickly learns to be bullet proof.   Kurjak confirms his involvement in the synthesis of the new drug and informs Bond that he wasn’t so much of a victim in the Serbian concentration camps as he was a participant.  His fascination for controlled experiments was born out of watching the inmates drink from a contaminated water supply and determining how long it would take for many of them to get sick and for the dysentery to spread.  Kurjak coldly informs Bond of the decontamination cycle about to commence in Bond’s section of the room as he leaves Bond to die with the room expected to reach 300 degrees Celsius.  Bond must urgently use his wits to escape the burning inferno that is about to engulf the room.  He reaches for some tools and a chemical canister and tries to burn a hole through the glass partition in order to escape.  Will he escape in time?  He’s Bond so we know he will, but in order to find out how, we must wait for Issue #5.

So far, I’m very impressed with the story and the artwork of this series.  Warren Ellis has constructed a suitable classic spy thriller with a very clever balance of the realistic and the fantastical.  I’m interested to find out more about Kurjak’s plot with the synthetic drug and what his ultimate end game might be.  Is there some personal motivation for what he’s doing and how does everything tie back into his work in prosthetics?  Obviously, both Dharma and Masters were working for him out of some personal sense of duty because they both needed his services.   I feel bad for the victims over at Berlin Station.  They were all killed off quite quickly and they seemed like a friendly bunch who might have come to Bond’s aid had they been able to figure out what was happening.  Artist Jason Masters does a great job with the action sequences.  All the action is very easy to follow in addition to containing some very remarkable artwork.  There are some frames that I imagine many Bond fans will greatly admire.

I look forward to seeing how this VARGR storyline will resolve.  It’s great to see Bond make a comeback to the comics medium because Bond is an ideal kind of character for comics.  There’s a visual aesthetic that is integral to Bond that is unique to him and I’m glad to see both Warren Ellis and Jason Masters tap into that and put it right there on the page for Bond fans to appreciate.  I’m someone who doesn’t regularly read comics so it’s a very different experience than reading a novel or seeing a film, but as a Bond fan all of my favorite elements are there.  The visuals are all well executed and the story has enough intrigue to keep me interested to find out more.  I suppose in a novel, we might have been treated to more information about the motivations of certain characters. I’d like to know more about Dharma’s role in all this as I think she’s the most fascinating of all the original characters. Will she remain loyal to Kurjak or will she switch to Bond’s side?  That’s why I suppose I enjoy reading a story as a novel as opposed to a comic.  In a comic, you’re getting the action and the dialogue and you must wait from issue to issue to have your questions answered.  In a novel, you can just read it and you get all the character motivations and a perhaps a better sense of where the story is going as you read it.  It takes a little more patience when reading a comic because each issue ends with more questions and you have to wait for the next issue to hope your questions will be answered.  I definitely encourage Bond fans to check out VARGR and get a hold of the issues if you haven’t already.  It’s a 6 issue story so I will probably wait until after the 6th issue to complete my review.