The Video Games of Bond – Part 1 by Matthew Grice 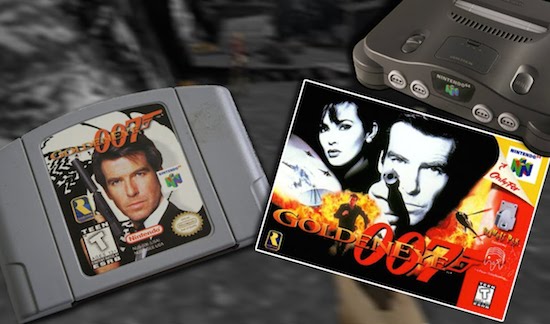 In this ongoing series, Matthew Grice takes a look at the video games of Bond.  Drawing mainly from his memory and his experience playing some of the games, Matthew takes us on a personal journey through the history of Bond video games starting from the beginning up through present day.  Part 1 takes us from the very first Bond game through Goldeneye 64.

One of the many reasons why James Bond remains such a popular phenomenon is due to the fact that it reaches across a vast range of media capturing the imagination of several generations of fans.  Even before the first Bond film graced the silver screen, the original Fleming novels were adapted to comic strips that were seen in the Daily Express and then later appeared in graphic novels.  As technology developed and the video game market started in the 80’s, Bond also entered the video gaming fray.

The first Bond video game was published in 1983 by Parker Brothers.  It was called James Bond 007.  This was compatible with the Atari, Commodore 64 and Coleco Vision.  I don’t know much about this game as it was released three years before I was born, but Youtube videos of the game play seem very far removed from what most of us would like to see in a Bond video game.

In 1985 things looked a little better for the future of Bond games.  Domark, founded by a Dominic and Mark, who is now part of the Eidos group that brought us A View To A Kill, based on the film that was released in the same year followed by Goldfinger in 1986. The Living Daylights then followed in 1987, alongside with Live And Let Die in 1988.  1989 saw the release of Licence To Kill; whilst 1990 saw the release of a Bond film thirteen years earlier which was The Spy Who Loved Me alongside with Lord Bromleys Estate and Q’s Armory.

It is interesting to note that there is artwork and advertisements out there for an Octopussy video game, which one presumes could have been developed by Domark, but for some reason was never released.

In 1992 THQ Inc. released James Bond JR for the Nintendo whilst Domark came back for its 6th and final outing that was James Bond 007:The Duel developed for the Saga Megadrive.   Even though my mother and her brother had owned a Sega Megadrive, I can’t exactly remember having this game.   James Bond: The Duel was the first Bond game to feature an original story line.

Even though I’ve been aware of these games, I’m not particularly tempted to buy an Atari, or Commodore just to specifically play them. Of course, a part of me wants to play them just for the sheer Bond experience.  The main reason why I don’t give in to the temptation is mainly because my beloved would no doubt have issues with it.  Even though it’s James Bond and I am indeed a hard core Bond devotee, it just seems like a lot of effort to have to go through for a gaming experience that will no doubt pale in comparison to what current games have to offer. Thanks to Youtube, however, it’s very easy to witness the game play on some of these older games.  This is a walk through of James Bond: The Duel on the Sega Mega Drive thanks to Youtube user “Torne.”

After a four-year break with in the Bond Game world, James Bond came back in 1997 in a completely new computer gaming experience.

In the words of Adele “It’s where we start’.  August 25th 1997 saw the release of Goldeneye 64 for the new Nintendo games console and ever since I have been hooked. My father has always been a huge fan of Nintendo and has owned every console they had ever made, so it was tradition that the Nintendo 64 would be sitting with in the TV stand.

If memory serves me well I think my father had purchased Goldeneye 64 in the November of 1997, and he was simply blown away alongside millions of other computer gaming fans.  It was definitely the first game I played in 1st person POV and was just purely fascinated by the whole thing.  One of my fondest memories as a twelve year old was to welcome friends ’round on a Saturday afternoon just to play the multi player levels, which where  generally a lot of fun.   One of the best features for multiplayer is that you could play as villains from different films throughout the franchise.  Oddjob, Jaws, Scaramanga and Baron Samedi come to mind.   The game utilizes settings and scenarios from the film Goldeneye, and since I was introduced to the game before even watching the film, it added something extra to my enjoyment of Goldeneye once I saw it for the first time.  A few levels were added such as the silo and the caverns, which did not appear in the film.

The last time I played the game was about thirteen years ago whilst on one my babysitting duties, and I still thoroughly enjoyed it. Despite the fact that graphics and gaming have developed immensely within the three years of it being first released, it was still an enjoyable experience.  Interestingly I also found it even easier to play than I remember from my childhood.

Originally Goldeneye was intended for the Super Nintendo Entertainment System (SNES) and was penciled in for a 1995 release to coincide with the film’s release, but the developers decided to release it for the upcoming gaming console that turned out to be the Nintendo 64.

This of course was a wise choice, because quite frankly I think this is what sold the Nintendo 64. Over eight million copies were sold, and I imagine that a good percentage of that market might have bought a Nintendo 64 just experience Goldeneye 64 making the game a phenomenon in it own right.   It won a numerous awards and garnered praised as the best first person shooter experience in home entertainment.  Goldeneye 007 is still what many of today’s James Bond fans compare the latest Bond games to.

In the world of Bond games, Goldeneye has become a brand name in itself.