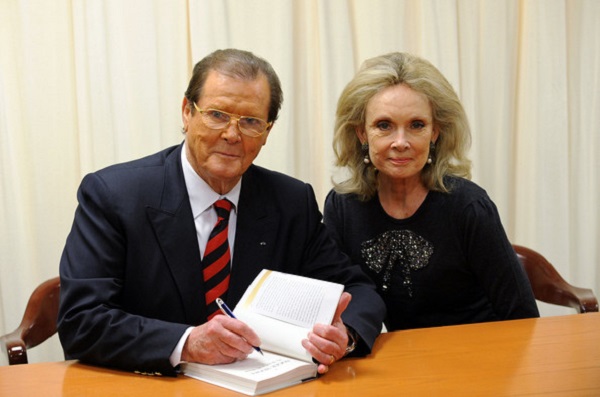 I originally wrote this review for my blog earlier in August of 2016. My initial plan was to do a combined review of all of Roger’s books, but time got away from me so I thought I’d publish my review here. At the time, I had no idea that Roger would be on interviewed on the podcast and I wasn’t sure how soon the podcast itself would get to finishing off the reviews of the Roger-era films. While I also read Roger’s 2 other books, this first one is the best starting point for anyone who hasn’t read them yet as it is a proper memoir. Bond on Bond is more of a coffee table book and One Lucky Bastard (Published as Last Man Standing in the UK) is more of a book of random show business anecdotes.  Both are worth picking up if you’re a Roger Moore fan, but this one I think is the most notable of the three books he has published. I’ll repeat this at the end of the review but if you have the means please consider a donation to UNICEF.  It is a cause that Sir Roger Moore has dedicated a significant portion of his life to and 90% of all donations go directly to help children in need around the world. 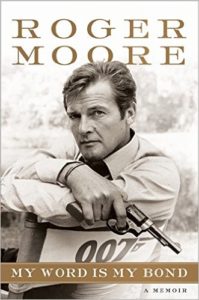 In 2008 Sir Roger Moore released his first book, a memoir entitled My Word is My Bond. The book is an enthralling tale that takes readers through his early childhood, his many years as a venerated actor with such prominent roles as The Saint and James Bond, up through his present day role as an elder show business statesman and more importantly a celebrity ambassador for UNICEF.  Moore has often been described as a raconteur and this book lives up to that expectation. As a reader you feel like you’re seated with him at your favorite restaurant sipping wine as he relates colorful anecdotes of his long storied career as well as his early childhood. Born in Stockwell, his childhood was plagued by illness and having to evacuate his home town to live in Devon while the threat of bombing raids loomed over London. Moore paints a colorful portrait of his early life and career and provides a rather insightful view into the latter days of the Hollywood studio system where actors would be under exclusive contract to a film making studio and the heads of these studios wielded enormous power and control over the careers of the actors employed by them.

Moore is charmingly self-deprecating throughout holding no delusions as to his actual acting prowess.  One gets the sense that he sees himself as someone  who was extremely lucky having the right look and obtaining the right contacts, friendships, and show business relationships to mold his career over the span of decades. His one literary vice seems to be name dropping, and that is actually the one consistent flaw throughout the book.  Oftentimes an amusing anecdote is accompanied by several tangents where the name dropping can get irritating, but once you get used to it, it can get rather amusing.  Moore is also a self-confessed practical joker.  On his James Bond sets, he would often prey upon Desmond Llewelyn who played Q.  Knowing that Q’s dialogue was rather intricate and full of technobabble, he’d often get hold of the script and change Llewelyn’s lines hours before shooting forcing him to learn new dialogue.  On other occasions, Moore was a peacekeeper as on the set of The Persuaders a TV show where he costarred with Tony Curtis for 1 season as a mismatched duo who went on adventures.  When Curtis called the episode’s guest star Joan Collins the “C-word” Moore was called onto the set on his day off to diffuse the situation.

Upon getting the much coveted role of James Bond, he recalls:

I’d be the first to admit that I’d been living the good life in the previous year or so…. That was brought home to me rather curtly when Harry [Saltzman, co-producer] called me one day.

Okay, I thought. So I started a strict diet.

The phone rang again. ‘Cubby thinks you’re a little out of shape.’

So I started a tough fitness regime.

Again the phone rang, this time it was Cubby. ‘Harry thinks your hair’s too long.’

‘Why didn’t you just cast a thin, fit, bald fellow in the first place and avoid putting me through this hell?’ I replied.

The stories he tells about making the Bond films are quite fascinating as a fan and Moore’s rather unique insight into this experience is always quite compelling and amusing:

Cubby and I visited Maurice [Binder, title designer for the Bond credits sequences featuring naked ladies ofttimes in silhouette] on his shooting stage one day and found him on his knees, lovingly spreading Vaseline over the private parts of one of his female nudes.  He said it was to keep her pubic hairs flat in front of the wind machine, so as not to incur the further wrath of the censor.

I turned to Cubby, ‘And I thought that was one of the producer’s perks?’

In a scene where Bond quips about Egyptian builders knowing full well that a representative of Egypt’s government was on set monitoring their every line, Roger suggested that he simply mouthed the line by moving his lips and not actually saying anything so that they could add the line later in post-production.  Many such stories are cleverly regaled throughout the book, however, when Roger doesn’t have something nice to say about someone he tries to keep it diplomatic by simply stating that he has nothing to say about them as is the case with Grace Jones his co-star on his final Bond film, A View to a Kill.  Jones reportedly took a large black dildo into the bed with her for their love scene, which seems to have perturbed Roger despite his penchant for practical jokes. At the same time, one gets the sense that he may have glossed over his failed marriages although he admits to sharing in some degree of fault for how they ended.  One of his ex wives spent many years denying him a divorce.

What drives the latter third of the book is his commitment to UNICEF, and we learn that despite his life of privilege Moore has done a remarkable job giving back to the world at large through his dedication to UNICEF bringing awareness to the struggle to help children in need around the globe. His major cause since he joined the organization in 1991 is to raise funds and awareness for Iodine Deficiency Disorder (IDD) in many third world countries. It’s a preventable problem that can be resolved by simply ensuring that every household uses iodized salt to avoid all sorts of maladies and mental disorders. Moore frequently meets with heads of state on behalf of UNICEF to urge them to combat IDD in their poorest communities. Roger has led a fascinating life and he is to be commended for his commitment to UNICEF. He has received many honors for his humanitarian work, and in 2003 he was Knighted by Queen Elizabeth II particularly for his work with UNICEF.  Roger Moore may not be everyone’s favorite Bond actor, but he’s lived a fascinating life.  Reading this book, you can’t help but develop a profound respect for the man. On his work for UNICEF he writes:

I’ve often been asked just how much UNICEF receives from the United Nations and why we need to raise funds.  The answer is UNICEF receives nothing from the UN, it is completely self-funded and that is why I – and others like me – go out banging the drum.  Of the money we raise, less than nine percent goes in administration costs around the world; the rest goes directly to the children

With that in mind and with the Holiday Season upon us, please consider a donation to UNICEF by going to their website and clicking the “donate” button on their page. It is a worthy cause and 90% of all donations go directly to help children in need.