Behind the Tuxedo – An Interview with Lluis Abbou Planisi 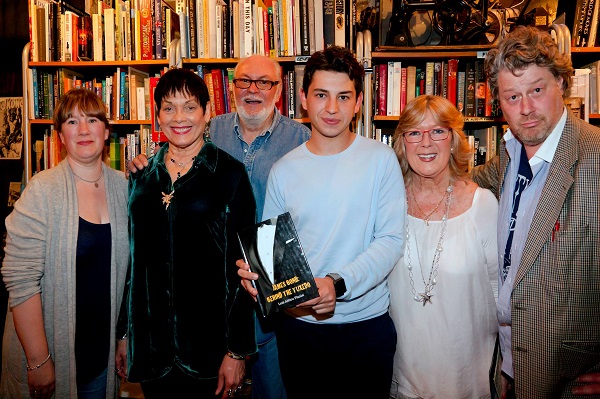 Behind the Tuxedo – An Interview with Lluis Abbou Planisi

Editor’s Intro: Lluis Abbou Planisi hails from Spain and at a very young age has become a consummate presence within the Bond fan community especially throughout Europe. He has met a number of influential Bond figures and has introduced a screening of Thunderball in London at a Q and A event featuring Sylvan Mason, Martine Beswick, and Battle for Bond author Robert Sellers.  Planisi has written his own book Behind the Tuxedo to honor his love of the Bond franchise and to talk about his own personal experience and journey within Bond fandom.

JBR: In your book you describe how you became a Bond fan after meeting Dame Judi Dench.  What was it like to meet her and how did your admiration for her transform you into a Bond fan?

Lluis: Yes, that is right: it was in 2012 and I had come to London with my family for a long weekend. One morning we went to Harrods and in one of the women’s clothing floors, my parents saw a lady and, although calmly, they went crazy. I remember my mother asking my father if he wanted a picture with her. They had the photo taken and my mom told her that the previous day, we had gone to the wax museum and he had a picture taken with her figure. She said: “now you won’t know who is who”. I thought she was very kind. I watched in amazement this scene, asking myself who was this short and charming woman.

It turns out that she was Dame Judi Dench! A few months later, Skyfall premiered and I loved it. I became a great fan of Dame Judi and I admire her so much. I guess one thing led to the other… A year later or so I interviewed her over the phone and on my 18th birthday she sent me, out of the blue, a video wishing me a happy day.

JBR: What is your favorite Bond film and why?

Lluis: Skyfall, again because it was the first one I saw on the big screen. Not only because of that, I think it has all the elements to be a terrific movie: a talented director, attractive women, a good actor (who should have played Bond for his last time in that film!), London, a fabulous song, actors, a touching ending…

JBR: As a younger Bond fan, is it more challenging to interact with older more veteran fans within the Bond fan community?  Have you encountered people who are initially dismissive of you because of your age?

Lluis: No, not at all. Every single time I attend an event I think how nice everyone is within the Bond community. However, I do remember this man with who I was having lunch —Well, to be accurateI was having lunch with a bunch of people from the creative industry and this man came to me saying that he had been told that I had written a book on Bond. He asked me how someone as young as me was interested in James Bond, I think he said Bond was not for teens.

JBR: What made you decide to write your very own Bond book and what were some of the challenges you encountered as you decided to take on this task?

Lluis: When I wrote my first book, it was in 2015 and it was in Spanish, which is still available. When I became a fan, I realised that it was challenging to find information about it in Spanish so I decided to create a website in Spanish, but then the opportunity of having a book published arrived and I took that train! Sometimes it was difficult to determine what information to include and what not. At that time I was fifteen years old, and surely now I would give importance to other things, but it is fine like this, I imagine that this makes that book a bit special.

JBR: You were able to secure a number of notable interviews for your book.  Was that very difficult to do? Who did you most enjoy interviewing for your book and why? Which interview were you most intimidated by?

Lluis: Yes, I started interviewing a Majorcan actor, Simon Andreu, who appeared in Day Another Day and I ended up chatting with an all time friend of Fleming, McClory and Whittingham. It is quite surreal when I think about it. Fortunately, everyone with whom I had the pleasure of speaking was extremely helpful to me so, it was kind of easy, however, sometimes get an interview, or another took more time, but I am very persistent! There were many letters, calls, emails and faxes involved in the writing of James Bond: Behind the Tuxedo.

I cannot just choose one; neither would it be accurate or fair. I must admit that I was very intimidated by the Bond Girls; it seemed incredible to me to be talking to Martine Beswick or Bérénice Marlohe. Anyway, with whom I remember that my voice trembled at the beginning of the interview was with Dame Judi.

JBR: In your talk with Steven Saltzman, son of Harry Saltzman, Steven describes James Bond as being someone who “is like my older brother.”  What was your reaction to this and why do you think this rings especially true for Steven?

Lluis: I remember thinking that it was one of the sweetest comments I had ever heard about James Bond, isn’t it?! Steven was a kid when his dad entered into the Bond world ready to make Dr No. I can imagine that, for a long, long time, 007 played an essential role in the lives of the Saltzman family. I think Harry was a fascinating character which world, sadly, crumbled when his wife passed away, and I do honestly believe that he does not have the recognition he deserves.

JBR: How did you come to know Sylvan Mason, daughter of one-time Thunderball screenwriter Jack Whittingham?  How would you describe her personal connection to the Bond franchise?

Lluis: Well… I somehow found her phone, and I rang her. At that time I was in Majorca, where I am from, and it happened that she goes there every now and then so, we agreed to meet when she was on the Island. However, my plans changed, I moved to London, and I went to her house. It was the discovery of a jewel; she is such a nice person. I dare to say that Bond would not be Bond without Jack Whittingham. He created the James Bond we know today, charming but a killer. Jack moulded the Bond which men want to be… and women want to be with, whatever they say! Last May I introduced Thunderball followed by a Q&A with her , fellow author Robert Sellers and the Bond Girl Martine Beswick at The Cinema Museum, in London; it was a sell out! And then Sylvan and I were invited by the Spanish fanclub Archivo 007 to their annual meeting in Madrid to talk about Sylvan’s dad and my books.

JBR: You were also able to speak with stuntman Bobby Holland who worked on Quantum of Solace, Skyfall, and Spectre.  His very first show business job was doubling Daniel Craig in Quantum of Solace. He went on to double for a number of notable actors like Chris Hemsworth and Channing Tatum. What is your favorite stunt from the Daniel Craig films?

Lluis: Bobby is one of the nicest persons I have ever met, and his career is impressive, and I now even train online with him! I liked the opening scene of Quantum of Solace; I also think that Spectre’s persecution in Mexico is fabulous, vibrant and colourful. I also like The Man with the Golden Gun and Villechaize’s fight on the train.

JBR: What Bond film would you recommend as a launching point for younger fans to get into Bond?  What do you think the Bond franchise can do to attract younger fans?

Lluis: That is a tough one! I will go with Skyfall since it was my first and it worked quite well. 2006’s Casino Royale might also be a good one to start with. For instance, I would not recommend Moonraker as it might be ‘too fake’… I do not believe they have to do anything as I would say that the Bond franchise has, right now, quite a big audience of young people. I think that if in events and these things you do not see younger fans it is because times have changed and now people love the character when a film is released and then forget about it.

Lluis: Everything, and nothing! I try to go to the cinema with low expectations when I am very excited about a new movie, however, I am dying to see Swann again, but I would not like a remake of On Her Majesty’s Secret Service, so maybe Bond should become a father… I am just kidding. I trust EON. They have been doing it for the last fifty years, they know what to do.

JBR: How did you meet Barbara Broccoli and Michael G. Wilson?

Lluis: That was such a surprise. I met them a couple of years ago in Majorca, where I am from. Guy Hamilton has lived in the island and had just passed so, they did this memorial and I was invited. I knew that Bond Girl Britt Ekland and Guy’s son were supposed to be there. However, once there I spotted these two familiar faces. I think not a lot of people knew who they were, there isn’t a big Bond fan community in Majorca. I asked them to have a picture together and then we chatted for a bit and Michael joked about shot Bond 25 in Majorca. I said that I missed Dame Judi in SPECTRE and Barbara laughed and said that it was Sam’s fault. I’ve met them a few more times after that; they are very nice, very down to earth.

Editor’s Note: Lluis’s book Behind the Tuxedo is currently available for sale as an e-book through Amazon. He is working on correcting some formatting issues so a forthcoming edition will be released at some point in the future.  If you do decide to purchase the e-book now through Amazon your device will automatically receive the updated edition upon release.