Beyond Bond at The New Yorker Festival – Report by Wilfred Picorelli 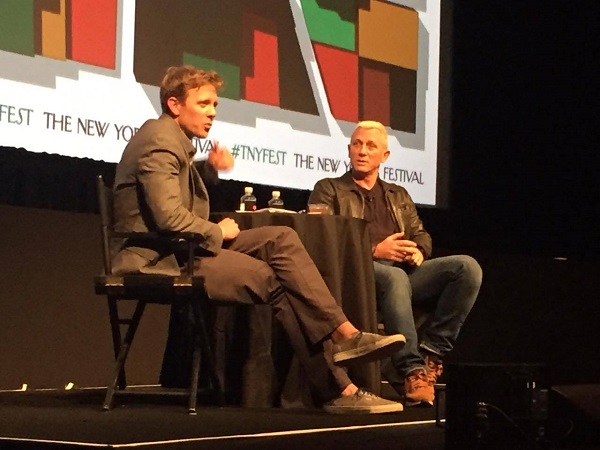 While Daniel Craig did not make an official commitment to continue as Bond, it would appear that he has warmed up to the prospect saying in response to the question of whether or not he would return:

” I got the best job in the world doing Bond.”

As far the next Bond film is concerned, when asked where it stands, Craig replied that “It doesn’t” but he wouldn’t rule it out.

In the video, Daniel makes reference to Barbara Broccoli producing Othello.  He also referenced the fact that Barbara is producing a film called Film Stars Don’t Die in Liverpool.

Later on, Daniel would go on to say:

While certainly far from an official announcement, this should put to bed the ridiculous notion that Daniel Craig somehow dislikes playing Bond or that he’s only doing it for the money.  Daniel later acknowledged and denied the reports of the salary figures being published in the press. He also said that the “slash my wrists” quote that had garnered much controversy had been taken out of context saying that everyone was tired at the end of production on SPECTRE including the producers.

Wilfred also noted that Craig said that “He is not rude to the press, but has rules about privacy.”

JBR listener Wilfred Picorelli got to ask Daniel a question about SPECTRE and here was Daniel’s response:

Wilfred asks if the closing scene in SPECTRE is “the end.”  Daniel cheekily replies “Yes” at first but if you listen closely, Daniel says “that’s what he believes.”  So it could be surmised that according to Daniel Craig, Bond believes his tenure as 007 is over at the end of SPECTRE.  Then, Daniel Craig adds, “It always says to be continued at the end.”  While no Bond film ends with “To Be Continued.”  This could easily refer to the “James Bond Will Return” scroll that comes up in the end credits.  Needless to say,  it’s very possible that Craig is implying that he will likely return even if he’s not saying it officially in this interview.

Daniel talked for 90 minutes primarily discussing Bond but he also mentioned that he would be doing 2 seasons of Purity, the Showtime series based on the novel by Jonathan Franzen.

He discussed how at the very beginning before Casino Royale materialized, Barbara Brocolli called him to Pinewood and he couldn’t believe it.  He read the script for Casino and when he saw how different it was he agreed to do it. He would not have been interested in the role if it had been in the same vein as the previous Bond films starring Pierce or Roger.  Wilfred reports that Daniel said that he had read all the novels and watched all the films.  He asked Pierce about playing Bond and Pierce told him “to have fun.”  He thought about contacting Roger or Pierce for further advice but chose not to do it deciding to make Bond his own.

Wilfred had a great experience at the event and he was glued from start to finish.  “I never thought I was going to be an at event talking to an active James Bond. I feel like I know him,” Wilfred said.