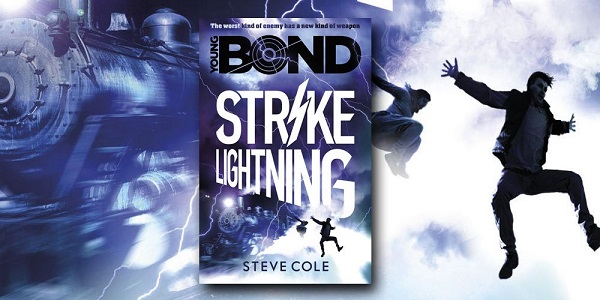 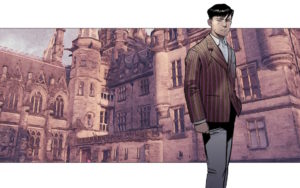 Steve Cole’s 3rd Young Bond book Strike Lightning comes right off the heels of his second effort Heads You Die.  Cole took over the Young Bond series from Charlie Higson who ended his tenure with By Royal Command which details the events surrounding Bond’s expulsion from Eton.  The Young Bond books themselves are a truly ambitious undertaking.  For those who are unfamiliar with the series, it attempts to fill in the gaps of Bond’s childhood using only the meager details that Fleming included in the his Bond novels, particularly from the obituary featured in the novel You Only Live Twice.  The series has followed young James throughout the 1930s starting at about the point when he was about 13 with Charlie Higson’s SilverFin.

Now with this latest installment, we find James shortly after his first term at Fettes College in Scotland where he finishes his education according to Fleming. Right before Christmas Break, James witnesses the death of a fellow student engaged in suspicious mechanical experiments with a professor. James stubbornly refuses to accept the school’s official conclusion that the death was an accident inadvertently caused by James being at the wrong place at the wrong time. Joined by his Etonian school friend Perry Mandeville, James decides to investigate the murder of his young friend only to find himself in the middle of a high stakes international weapons smuggling conspiracy with the added danger of a secret weapon possibly falling into the hands of Nazi Germany.

I don’t want to give away any SPOILERS regarding the nature of the secret weapon, but it’s one of those things that requires a bit of suspension of disbelief.  In his postscript, Cole details about how such a weapon might have been realized in the 1930s, but even he admits it’s one of those things that while not entirely impossible would have been highly improbable for the period of time in which this story takes place.

There are quite a few antagonists for James to square off against but not all of them turn out to be who we think they are when we first encounter them.  This is the first instance since Higson’s By Royal Command I could think of where characters employ a kind of subterfuge to disguise their true motives.  The problem for young James is that throughout the book, he has to evade all these antagonists at various times because it would appear that they are all working together in a conspiracy with serious ramifications beyond the murder of his school friend Marcus.  First, there’s Dr. Randolph Whittaker, the science teacher who the students at Fettes refer to as Captain Hook because his hand had been blown off in The Great War.  James’s friend Marcus is killed in Whittaker’s experiment. Then there’s Whittaker’s 18 year old female assistant Herta, who tries to obstruct Bond’s inquiries into the events surrounding Marcus’s death. Both Herta and Dr. Whittaker appear to be using their positions at Fettes College to facilitate weapons research for a disabled owner of a weapons manufacturing company named, Maximillian Blade.  Finally, there’s Ambassador Grünner who appears to be procuring weapons for the Nazis.  All these characters intimidate, obstruct, and harass James at one point or another until James uncovers the truth behind their conspiracy.

Luckily, James has some help along the way. He enlists the help of Perry Mandeville, who we last saw at Eton before James was expelled. He also meets up with this book’s Bond Girl – Kitty Drift, a brash, smart, and socially awkward young woman who also happens to be a train enthusiast.  Kitty’s skill set comes in handy and her obsession with train schedules and a mysterious “ghost train” all come to the forefront to help James along the journey, a journey that begins at Fettes College in Scotland, takes him to the hamlet of Ruskie and transports him to The Hague in the Netherlands and finally to an area just south of Düsseldorf in Germany where you can imagine some most perilous dangers await.

At times, Cole offers up a very vivid picture of James’s innermost thoughts and feelings.  At the beginning, he starts to dwell on the fact that since his parents died, he hadn’t truly ever felt at home except for the times when “danger [is] biting at his heels.” James was a child orphaned at the age of 11, and since then his Aunt Charmian has seen to his upbringing, however, much of his time has been spent boarding between Eton and Fettes as well as with the thrilling adventures James has found himself in throughout these 8 novels in the Young Bond series. From very early on in the series, James developed quite a taste for danger and for using his skill set and ingenuity to save himself as well as others.  By the end of Strike Lightning, we see a bit of a shift in James’s thinking about the nature of war and weaponry.  Someone along the way had lectured him about how weapons can be just as much a deterrent to war as they are a tool in warfare itself. He’s told that “Weapons save lives,” but then he asks himself “Is that what I’m becoming?” For the first time, we see Bond briefly confront the realities of his future life as an agent prior to him even realizing what his fate has in store.  It’ll be interesting to see how Cole explores this in his next and final Young Bond entry Red Nemesis due out in the Spring of 2017.

Strike Lightning is a fast paced story with many chases, some actual spying, and many thrilling confrontations.  If you enjoy the series you’ll enjoy this entry as long as you allow yourself to suspend disbelief a little which usually comes with the territory anyway with Bond.

Steve Cole was very meticulous in his research for this book and he actually visited Fettes College to find out what life was like there for students in the 1930s.  The school put him in touch with some actual Fettes College alumni from the era and one gets a good sense of the authenticity regarding his descriptions of James’s life at Fettes at the beginning of the book. He also went to The Hague and visited the Hotel des Indes where a pivotal scene takes place so that he could accurately describe the sequence.