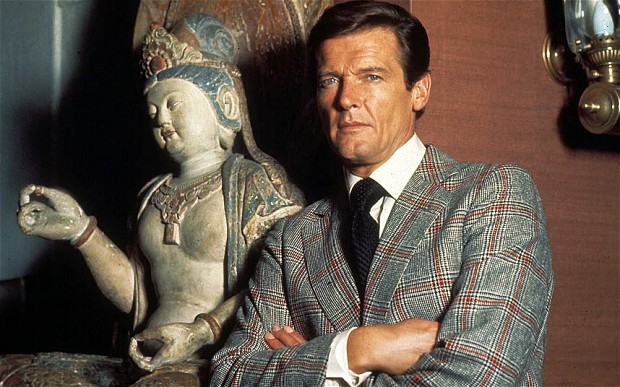 James Bond Radio listener Simon Uskuri tells the tale of his meeting with Sir Roger Moore at his “My Word Is My Bond” book signing at the National Theatre, London. Funnily enough, Chris and I were at that very same event. Chris behaved like a gentleman, whereas I was escorted away by security for trying to get my Live & Let Die poster signed despite being told multiple times that he was only signing the book…*sigh* – Tom

They say never meet your heroes. I think that phrase was coined by somebody who didn’t actually have the opportunity to meet their hero!

October 16, 2008. The day had arrived. Not only was it my day of birth, (if I’m honest that was a minor issue), far more importantly it was SIR ROGER MOORE DAY!!! The day I had been fantasising about since I was old enough to put on a pompous English accent and order fine wines and make conversation about cheese! This wasn’t the first time I thought I was going to meet Sir Rog! That day in question (when Sir Rog was just plain old Rog), was back in late 1999. Roger was getting his OBE from Her Majesty for being a God (or services to UNICEF) I can never really remember which!

I was in a speeding car on the motorway. In reliving this tale I imagine I was driving a classic white 1962 Volvo P1800 or a banana/gold painted 1970’s Aston Martin DBS. My hands prized on the steering wheel firmly as I’m speeding along. While darting round corners, I catch sight of myself in the rear-view mirror, I can see my eyebrows navigating either left or right (true Roger Moore fashion – It’s less of a ‘Tom, Tom’ more of a ‘Rog, Rog’ you could say), heading towards London on route to see my estranged father. In reality I was a passenger, my mum’s friend was driving, I was only 15 and my father was in hospital after having a heart attack. This felt like a big day, not seeing my birth father but seeing my dream father, the ideal self, the role model that I had been deprived of for so long.

I was in a constant daydream – dreaming about the moment that I see him and he walks over to me and says, “It’s okay, don’t worry, it starts to happen to you now, your saved!”

And then together we both look up and centimetres above our heads, a white circle appears followed by the opening bars of the Saint theme building to it’s crescendo around us….

Sadly we didn’t meet that day, but I didn’t lose hope, I knew it would happen again. That opportunity came while sitting in the National Theatre, London, clapping my hands together (so loudly that it masks the dramatic beats of my heart), as I stare straight at a muffled image of Sir Roger Moore. I have never been this close to him and the best bit is yet to come. I join the queue to meet and get my book signed by Rog! (I understand this sounds very stalker-ish but I am a fan…I do also understand that stalkers would use the same argument. You’ll have to trust me, Saints honour!)

As I am standing in the queue, which feels as long as the 9 years it took to reach this moment, my fellow Persuader’s voice sounds like it’s under water. I’m not registering him or any other voice in that queue. I am visualising the moment that our two souls meet and we become united. As the queue moves, the moment is getting closer- it’s almost time! What am I going to say? I’ve been planning this moment for a long time.

Do I thank him? Ask for friendship? Tell him about my Roger Moore doll? The fact that I used to talk like him (of course when I say ‘used to’ I only stopped doing it five minutes ago). Tell him about the fact that from the ages of 13-16, I was dressing like a 70 year old man in an attempt to be him? I was the youngest boy in M&S! He was my idol, I even planned that he would be at my wedding, my best friend! This is a lifetime we have been together, and the moment is here where I can see him! There is the famous Sir Simon Templar…

He’s just sitting there like a raisin! I seem to have selective hearing as I can now hear many other voices relating tales of just who and what Sir Roger Moore means to them. Wait till he hears my story! There are only three more people between us and the nearby bouncer looks like some kind of heavy. The sort you would find in one of Sir Roger Moore’s classic television series. As the bouncer (lets call him Red Shirt, I know different show altogether but the context is the same, we will hate him and want him to die by the end, trust me).

Red Shirt is pushing people along while barking that you “Can’t have your picture with Sir Rog or talk to him.” That’s right, it’s like seeing a cardboard cut-out but not being allowed to even approach it.

“All he is doing is literally signing your book and then you moving on!” screams Red Shirt. WHAT?! Does this guy not know my story?! Does he not know how long it’s taken me to get here?! Still those are the rules, so I will follow them…it would be very un-saintly of me if I didn’t!

My selective hearing is on full power now, totally in-tune with all the nearby conversations. Suddenly I hear – “You served with my grandad, he remembers you.” Well this wasn’t to me, unless he means we served time together in the roll neck department of M&S! I realise what’s happening – this guy is breaking the rules. Has he not just heard Red Shirt say we are not allowed to talk?! The question is answered “Oh really, who is your grandad?” To my amazement, the voice I hear is Sir Roger Moore’s.

They are now engrossed in conversation! As a result of this rule-breakers stupid grandad (who, I am calling – Sgt ‘Trample On All Of Your Dreams’), I am being pushed along, my book taken by the Red Shirt and I’m being passed along not able to speak to Sir Roger Moore! I am mad at this! It’s my moment, I need to speak now. Lord Brett Sinclair would talk…do it SIMON….

We talked! Now tell him the rest! Before I had time to even process that thought, I am pushed out of the queue by Red Shirt! My moment had passed faster than you would see a hair out of place after a fight scene in The Saint. Then to kick me when I am down, I look up and see the lasting image that haunted me for several more birthdays after…The guy is getting a picture with him!

So I guess the moral I learnt from this story is, it all goes full circle. What made me fall in love with Sir Roger Moore and the characters he played, was his adversity to bend or break the rules when he needed too – something that I have been afraid to do throughout my life. That day it cost me something special.

So even then at 25 years old, like all good fathers he was still teaching me and giving me a valuable lesson. I guess as well as all the raised eyebrows and rollnecks I’ve learned something too, he really is a saint!