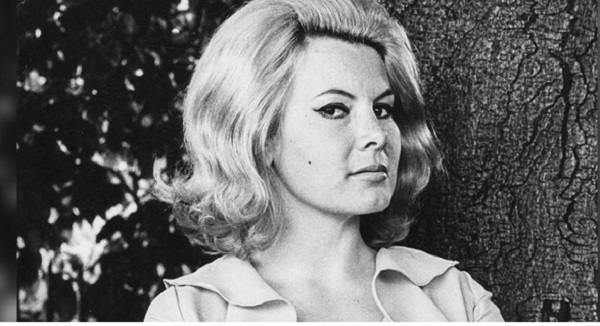 In yet another week of sad departures, new came of the death of actress Molly Peters best known to Bond fans as Patricia Fearing in Thunderball (1965), the sexy nurse who is seduced by Sean Connery’s James Bond 007 in a game of cat-and-mouse with Count Lippe played by Guy Doleman at Shrublands Health Clinic. Peters passed away on 30 May 2017. The cause of death is unknown.  A statement on the official James Bond Twitter page confirming the sad news, read: ‘We are sad to hear that Molly Peters has passed away at the age of 75. Our thoughts are with her family.’ *Note sources close to the family say she was 78.

The character was drawn from author Ian Fleming’s real life soujourn at the health farm, Enton Hall, in Surrey. Introduced in Chapter 4 Tea and Animosity in the contentious 1961 novel, Fleming’s 9th Bond book described Fearing in uniform as “clean, white, comforting, desirable.” Fearing eventually succumbs to Bond in the squab seats of her bubble car high in the Sussex Downs.

The novel was legally credited to the product of the imaginations of Ian Fleming, Jack Whittingham and Kevin McClory who went on to receive sole producer credit for the movie with Harry Saltzman and Albert R. Broccoli presenting it. The eventual screenplay was by John Hopkins and Bond veteran, Richard Maibaum.

Director Terence Young returned to direct the fourth Bond film and his third and final picture. He remembered the girl he’d given a “cough and a spit” part to in his previous picture,  The Amorous Adventures of Moll Flanders (1965). In 2015, Molly Peters described getting the role to the authors of Some Kind of Hero: The Remarkable Story of the James Bond Films, “I was there because I looked good. I remember going down to the studios. I was nervous as anybody could be. I went in with a naivety about the whole thing. I do remember after I had completed the scene there was a spontaneous applause. I don’t know if they did that for everybody. I didn’t really realise the importance of that film and how many people were testing. All I knew was that Sean Connery was in it. After the test I realised this was something bigger than I had contemplated. McClory and Broccoli asked me if I would go blonde for the part. I was brunette. I said I would go green, pink whatever they wanted.” She had  previously told noted Bond historian, John Cork, “It was exciting for me and I was very nervous since I’d never actually been on a soundstage before. In another corner of the studio I saw this very tall handsome man and I remember Terence Young said to me ‘Darling of course you know Sean don’t you?’ Well I’d never met Sean in my life.”

Richard Maibaum described the part: “Molly Peters, a statistically sound (37-24-37) choice—at left—for the role of a mischievous masseuse in Thunderball, trouped with a London repertory company before getting Bonded for her movie debut. Early in the film, while recuperating from his last case at a British health resort, Bond gets rubbed the right way when the bosomy blonde gives him a mink-gloved once-over-lightly. Getting the upper hand-in-glove, Bond returns the favor; then they slip into something comfortable—a nearby sauna – for an even steamier session of mutual massage.”

Peters recalled to John Cork her memories of working with Connery, “He was becoming very well known anyway and had already completed three Bond films. For me he was a very honest, straightforward man and he didn’t suffer fools gladly. He would seemingly get things done. I had had some personal problem and we were just about to do the bed scene. I was crying and he thought someone had upset me on the film set. He came up and put his arm around me. He was very protective of me and very kind. I do value that. The whole atmosphere to me was new, exciting.” In the scene where Fearing is seduced by Bond as a form of blackmail for not reporting his “accident” at the hands of Lippe on the traction machine, the couple were to make love in a steam room. Peters, a former glamour model, used to being baring her body before cameras, took the scene in her stride, “In fact I was billed as the first nude in a Bond film. I wasn’t embarrassed. I remember in those days you had to cover your nipples with flesh coloured plasters.  I took them off. I went nude. I thought that was so stupid but there wasn’t much to see.” However, nerves did get to Peters “I remember fluffing my lines really badly ‘Go in to the shower it will shrink you back to size’  and I all kept coming out with was ‘It will stretch you back to size’ We cleared the set for this because I appear to be naked in the shower – Sean kept fooling around in those scenes – it was quite funny. [He’d came out] of the shower and walked as Groucho Marx used to walk.” Peters later recalled the proud Scot after an England vs. Scotland football match which explained a famous publicity still showing her in bed with Connery wearing a tartan hat and Terence Young sipping tea in front of them.

Peters was fond of her director, “Terence Young a very sophisticated man, a very knowledgable man, a delightful man. I think he was probably more James Bond than anyone else. He would try to teach you perhaps some etiquette that you didn’t have or that sort of thing. Teach you the ways of the world, particularly cinematically. I was sad when he died. I went to the memorial service and there were lots of people there including Sean Connery.”

Thunderball rode the mid-sixties wave of Bondmania. The film was packed with pulchritude and featured Claudine Auger as Domino, Largo’s mistress, Luciana Paluzzi as Spectre vixen, Fiona Volpe, Martine Beswicke as Paula Caplan as well as Molly Peter’s ample assets. The actress enjoyed a whirlwind, worldwide publicity tour, “Martine and I were walking in to the premiere in Rio de Janeiro. I was blonde with a tan and wearing a white dress. The crowds wanted to touch me. Whether they envied me as if I was someone out of this world, living a different life which I was I suppose.”

Peters was actually born Vivien Mollie Humphrey but took her stage name from her brother, Peter. In Thunderball, she is billed as “Molly”. Peters later married and lived with her husband in Ipswich, Suffolk. She and her husband had a son named Aaron, who tragically pre-deceased her whilst serving in the Royal Marines. She is survived by her grandchildren.

SOME KIND OF HERO: The Remarkable Story of the James Bond Films by Matthew Field & Ajay Chowdhury, updated to include a detailed account of the making of SPECTRE, is due out in paperback in July 2017 published by The History Press.

1967 The Naked World of Harrison Marks – Herself

As a Figure Model