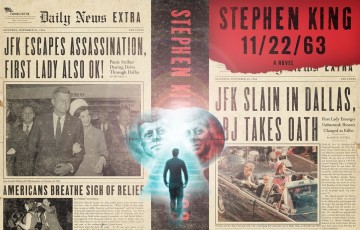 Proof that Bond follows me everywhere: I decided to take a little break from reading all things Bond so a while ago I began reading Stephen King’s time travel novel 11/22/63 about a school teacher who ends up going through a portal that takes him to 1958. I wanted to read the book before watching the miniseries on Hulu which deviates a bit from the original novel (fans of King’s novel IT will find the return of few key characters). The owner of the diner where the portal resides implores Jake, the protagonist, to live in the past long enough to thwart the Kennedy assassination (hence the title). So, I’m  about 600+ pages along (the book is about 853pgs long) and I come across this paragraph:

“… at five that afternoon I was sitting across from the Greyhound terminal on South Polk Street, near the intersection of Highway 77 and the still-new fourlane I-20. I was reading (or pretending to read) the latest James Bond, The Spy Who Loved Me.”

Jake then goes on to describe Lee Harvey Oswald’s arrival in Dallas in 1963. It just goes to show that Bond seems to pop up in places where I least expect it, in this case it turned out to be a direct reference to literary Bond. I was initially surprised that King didn’t go for From Russia with Love, which had been published a few years earlier but received a very considerable boost after endorsement from Kennedy. Spy was first published in the UK on April 16th 1962 with Viking Books publishing the US edition on April 11th 1962. In the time frame of the novel King’s protagonist was actually just a few months shy of the US publication of On Her Majesty’s Secret Service which was published on April 1st in the UK by Jonathan Cape while the US edition was held up until August of 1963 once Fleming switched his US publisher to New American Library after leaving Viking Press who published the US editions of the previous Bond books.
Strangely enough, The Spy Who Loved Me is probably the least renown or regarded Bond book in the Fleming series.  I wrote about this over at my own blog some time ago.  It was written from the perspective of a 23 year old Canadian woman in the first person.   Vivienne Michel recounts the story of her life and her woeful relationships with men for about two thirds of the book before James Bond even shows up.  It’s a Bond novel where the focal point is not about espionage or even about Bond at all. It’s about the story of a young woman who had been treated horribly by men her whole life and how such a woman finds herself in the precarious circumstances to be in need of a heroic man like Bond.  Bond eventually arrives and through wit, cunning, and physicality saves her from being brutally raped and killed by gangsters at a secluded hotel. 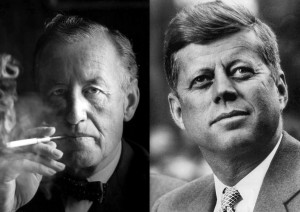 Perhaps it’s just a coincidence, but I couldn’t help but see the parallels between Fleming’s novel and King’s novel.  For one thing, on a very basic level there’s this switching of narratives going on in both stories.  Both are told from the 1st person perspectives of their protagonists although King’s protagonist is a young male teacher.  Both books, however, set up expectations for the readers only to divert the reader away from what a reader thought he was getting when he picked up the book.  In 1962, most readers picked up the latest James Bond novel expecting yet another spy thriller.  SPECTRE and Ernst Stavro Blofeld had just been introduced in the previous book Thunderball, but that novel has its own sordid history.  The word “Spy” is even in the title so a reader who just picked up the book as a literary Bond fan would have undoubtedly expected a new spy thriller.  Instead, readers were treated to a personal narrative about a young woman struggling for independence and respect in her relationships with men in a time where most women were not afforded the same regard as men especially when it came to how they were expected to conduct their personal and professional lives.  Needless to say, this may have been a bit ahead of its time for mainstream readers in the early 1960s. In Stephen King’s book, you have a story about time travel with one of the most infamous days in United States history as the title.  Readers might expect an in depth analysis of the assassination and the historical figures involved.  Well, 600 pages in and the reader spends more time with Jake teaching in a suburban High School romancing the young librarian he was set up with rather than tracking Oswald or Kennedy or engaging in any activity that might alter the the timeline.   The book is more about the personal journey than the historical event that triggered the novel.  King does indeed deliver on some things that readers who began reading this book for the historical fiction involved, but it’s not nearly as much as I expected.  Strangely enough I actually find myself enjoying the parts of the story that are completely about the fictional characters more than the instances where the novel returns to the apparent business at hand preventing the assassination.

In one instance, Jake is supposed to be tracking Oswald’s movements when an emergency happens in a crucial moment.  As Jake often reiterates in this novel, “the past is obdurate.  It doesn’t want to be changed.”  Jake is supposed to see if Oswald either acted alone or if he was part of a larger conspiracy.  One way to determine this is by tracking Oswald’s movements during his previous unsuccessful assassination attempt on General Walker who had been widely criticized for supporting racist policies. Jake determines that if he follows Oswald and he attempts to assassinate Walker alone then he most certainly must have acted alone on the fateful day in question.  So, Jake is about to leave his apartment when he gets a phone call and it’s the deranged ex-husband of Jake’s love interest, Sadie.  Jake hadn’t expected to meet Sadie before going into the past so he had no idea that her ex-husband was going to try to kill her on the very pivotal day that would have set the stage for his mission to save JFK. Of course, Jake opts to abandon his plans to follow Oswald in order to save Sadie. If this sounds a bit familiar it’s probably because in a way it’s a little similar to how Bond encounters and saves Vivienne Michel in Fleming’s novel.  Of course, Bond wasn’t a time traveler but he was a man who came to the rescue of a woman in need, a woman at the mercy of dangerous men.  Rather than being of the mindset of having more important fish to fry (if you recall SPECTRE and Blofeld are active threats at this point in the literary Bond timeline), Bond decides that saving Vivienne is the most urgent thing to do at that moment in time.
Sadie’s own history with men even parallels Vivienne’s to some degree because while Vivienne’s life hadn’t been threatened by her former lovers we learn about in the first two thirds of the novel, she had certainly suffered through abusive relationships.  In King’s book, Sadie recounts her husband’s oppressive attitudes towards sex to the degree that he put a broom in between them on the bed and only allowed her to sexually gratify him with her hand instead of engaging in any kind of affectionate behavior. Indeed, Sadie could have easily arrived in the Texas town of Jodie with the same mindset that Vivienne used to open the start of The Spy Who Loved Me. Reading Vivienne’s words after learning about King’s character in his book almost feels like the two characters are echoes of each other.

Although I haven’t had a chance to properly dive into the Fleming letters in The Man with Golden Typewriter just yet, for this occasion I decided to peruse what I could find regarding The Spy Who Loved Me.  Here’s what I found. In a letter dated April 18th, 1962, Fleming replies to a Mrs Florence Taylor from Ford’s Book Stores,Ltd who wrote back a rather negative review of the novel after receiving an advance copy.  In her letter she described the novel as “a great disappointment” and went on to say that “I do hope that this is not a new trend in your style of writing.“
Ian Fleming replies with grace and decorum: 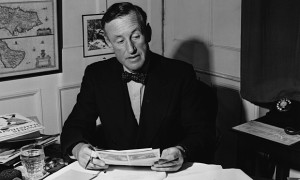 ” It was really very kind of you to have taken the trouble to write to me and I was touched by your affection for James Bond.
The point is that if one is writing about a serial character one’s public comes to want more or less the same book over and over again, and it was really to stretch my writing muscles that I tried to write like a twenty-three year old girl and put forward a view of James Bond at the other end of the gun barrel so to speak.
But this is a unique experiment and I have just completed the next Bond book, I think the longest yet [he doesn’t say this but he’s referring to OHMSS], in which he appears from the first page to the last.
Again with many thanks for the kindly thought behind your letter.”

The very next letter to Michael Howard of Jonathan Cape further illustrates Fleming going into a rather defensive mode about The Spy Who Loved me to the point of declining a 2nd print run for the novel and for the book to be withheld from the Pan editions.  Clearly, Fleming felt that his experimental approach to this Bond book failed to resonate with readers the way he had hoped. Of course, the next novel would be On Her Majesty’s Secret Service, which resulted in a resounding return to form, but I still wonder what other Fleming books might have been like if his experiment with The Spy Who Loved Me worked.  The possibilities would have been limitless at least for the few more Bond novels that remained to be written before Fleming’s life was cut short in August of 1964.
All those purist out there who think Bond stories must all conform to Fleming’s blueprint should also realized that even Fleming himself was open to experimentation with his books.  As for the similarities between Stephen King’s novel and Fleming’s disavowed Bond book, perhaps they are merely coincidental, but even if they are it’s impossible to deny that certain echoes exist within common story threads.  Whether we choose to see them or not, these echoes are out there for us to find if we want to, not just as they pertain to Bond but as they pertain to life in general.  Anyhow, I just found it rather strange that while I had embarked on a rather decisive non-Bond reading experience, it all came back to Bond in the end.
article by Jack Lugo