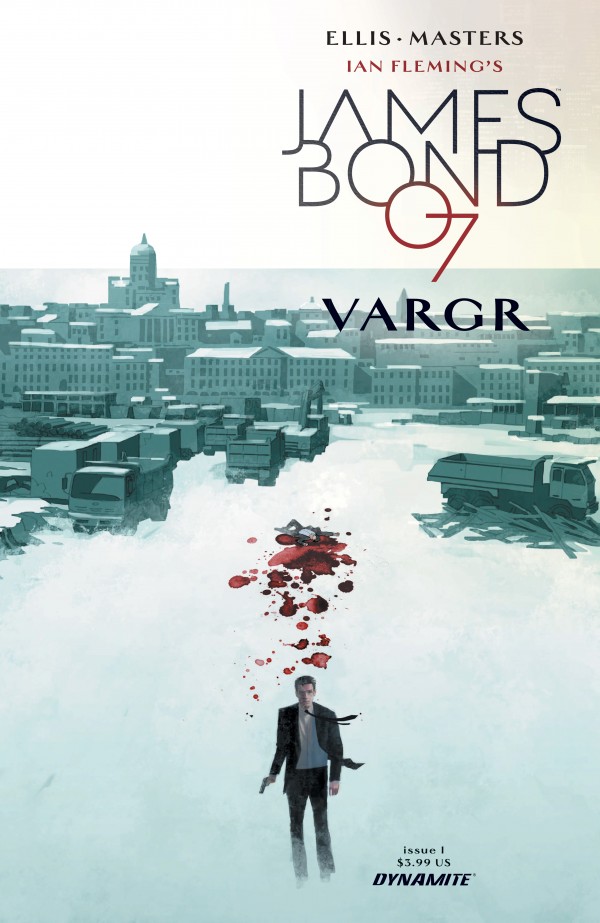 Warning: the review below contains SPOILERS for the 1st issue of VARGR.  If you don’t want to know certain details, I can only say that I highly recommend it and I encourage you to read my review after you’ve had a chance to read it.

Eagle Award winning author Warren Ellis to write the story and Jason Masters to produce the artwork, and the result is the highly anticipated first new James Bond comic since an incompleted Goldeneye adaptation by Topps Comics in 1996.  Prior to that James Bond had a long history in the comics medium that still remains mostly unknown to casual fans.  In actuality, James Bond had existed as a comic strip character nearly 4 years before Sean Connery immortalized the role in the first James Bond film Dr. No.   From 1958 to 1983, the Daily Express and the Daily Star carried the James Bond comic strip initially adapting the classic Ian Fleming canon and then publishing original Bond adventures once the Fleming material had been exhausted.  While I haven’t had the opportunity to examine these original comic strip adaptations of the Fleming stories, they have managed to receive high praise, and there are many who admire the effort that when into adapting Fleming stories that have otherwise been vastly altered in their cinematic presentations by EON.

Although the timing of this new endeavor to return Bond to the comic medium is meant to coincide with the release of SPECTRE, Ellis has wisely created a new and independent Bond universe with the release of VARGR.  Although I have an idea of where they might be going with the title, I’m still not absolutely sure of the title’s significance other than the fact that it sounds almost nothing like a Bond title.  Despite lacking a proper Bondian title, all the other elements we could expect to look for in a Bond comic are present in this 1st of 6 issues.  The events take place in the present day, but there is definitely a very cool retro vibe that works very well for the comic, and so far there’s a good balance between classic light hearted Bond elements that we’ve come to enjoy from the films and a bit of noir influenced dark grittiness fans of Dalton and Craig will appreciate. 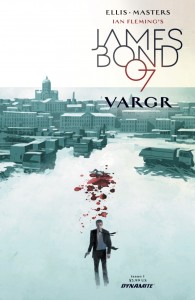 Issue #1 is meant to be a bit of a table setter.  It starts off with what can only be regarded as the comic book equivalent of a pre-credits sequence.  We are introduced to a nefarious man running away presumably from Bond.  When Bond appears, they struggle and fight. Bond kills him in cold blood leaving him dead in the snow.  We learn that this man had killed 008 and Bond had been tasked with a revenge mission to take him out. 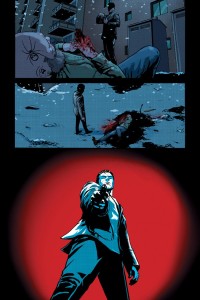 Soon after, we get to MI6 headquarters with a brief flirting with Miss Moneypenny and a mission briefing in M’s office.  As we know, the cinematic franchise has cast black British actress Naomi Harris in the role of Miss Moneypenny beginning with Skyfall (2012).  In VARGR, not only is Miss Moneypenny portrayed as a British black woman, M is also portrayed as a British black man for the very first time. It’s a development that I believe works very well, and I should hope that more opportunities for racial diversity in the franchise continue. The M scene plays out very much like it has many times already in the classic Bond cannon.  The dialogue is smart and tightly wound. We get the sense that M is slightly overworked and eager to send Bond along on his mission, which involves him taking over a case 008 had originally been assigned.  Bond is to undermine the efforts of a drug dealer and prevent him from importing a new dangerous drug to the UK.

The mission sends him to Berlin with the caveat that he must adhere to a new piece of legislation forbidding MI6 agents from carrying weapons within their home country.  Arrangements must be made for Bond to acquire his gun once he reaches Berlin, but this issue doesn’t get quite that far.  Before Bond heads off, he must see his quartermaster of course! This time Ellis has chosen to go with the older gentleman in a laboratory rather than with the Mendes incarnation young wiz-kid type.  I suppose it’s meant as a bit of a throwback to the Q we had grown used to for decades although this incarnation of Q is more physically reminiscent of John Cleese than Desmond Llewellyn.  The Q scene is quite fun and Ellis seems to instinctively know how to get the right chemistry going between these two characters.

We are also treated to Bond having lunch with Bill Tanner before going on the mission, which is something I think many hardcore Bond fans will enjoy as we are reminded of the friendship that Bond has with Tanner that up to Skyfall hasn’t made it into the films.  Kingsley Amis’ Bond continuation novel, Col. Sun, probably has given us the best portrayal of this friendship within the Bond literary cannon.

I apologize if I’ve given away too many details, but as I’ve said before this issue is all about setting up a larger plot and reintroducing us to this new conception of the Bond universe.  Much of the actual plot and intrigue hasn’t even started yet.  The issue is very brief but it does what it needs to do and it’s very easy for a reader to get immersed in this new incarnation of Bond, an incarnation that many would argue is long overdue.  VARGR is a promising start to what looks to be a thrilling entry in Bond’s return to the comic medium.  Ellis and Masters have created a comic that is quintessentially Bond. I look forward to the next 5 issues with keen interest.

I recommend pre-ordering the comic through Dynamite’s  Dynamic Forces website.  The comic should be available at most newsstand retail outlets.