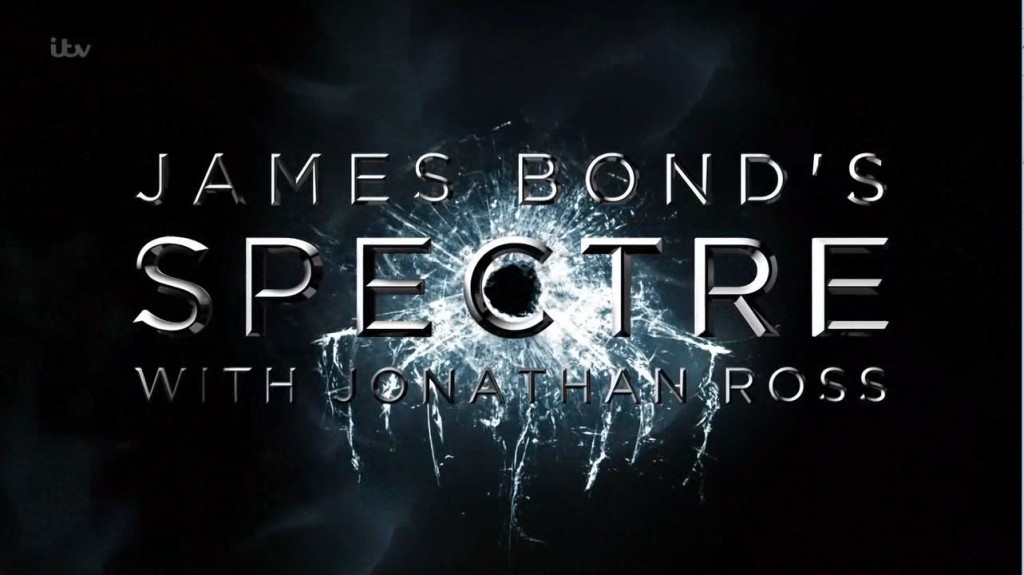 53 years, almost 24 films, and James Bond is as much a part of the public consciousness now as he was when Connery first donned the tux in Dr No.  As an ardent Bond fan, I’m sure I’m in the same position as many other Bond addicts: counting down every day until the imminent release of what is shaping up to be one of the very best Bonds of all, SPECTRE, and frustrating friends and family with the endless repeats of the trailer, Sam Smith’s gorgeous theme song and mutterings of 10 days to go… 9 days to go etc.  I can only imagine how excited I’ll be on opening night of the film.

With the release of SPECTRE comes the obligatory UK compilation programme looking back over the best of 007 over the years.  This reporter was keen to see new footage and fuel his excitement for Bond 24 only to be left with less a bang, more of a “half-cocked” experience.  Whilst UK TV personality Jonathan Ross is an amiable presenter, and clearly a Bond fan himself, it’s hard to take the person who gave Die Another Day such a glowing review back in 2002 very seriously.  That said, there were some small pleasant surprises along the way.

As expected and already stated, no programme looking at the Bond series would be complete without the clips of classic scenes from the past: the iconic Union Jack parachute from Spy, Goldfinger almost emasculating our protagonist, or Q’s ghetto blaster – um, what?  Yes indeed, you read that correctly.  Of all the great moments in the series, and in The Living Daylights alone, Ross marks out the Q scene as one of his favourites in the series.  More credibility lost right there.  Other mentions go to the cable car scene in Moonraker, Rosa Klebb vs. Bond finale and Bond and Tanaka observing the building of Little Nellie.  In fact, talking of showing some of Bond’s best moments, there is barely a moment of OHMSS embedded into this documentary, arguably one of the best films of the series.

Interspersed with this nostalgic jaunt down memory lane we are given tantalising glimpses into SPECTRE and what part it plays in the Bond canon, the most entertaining of which involves Q looking mildly irritated with Bond as he’s playing around with a gun in his laboratory:

“Shall we get started?” mutters Whishaw. Also we get a glimpse of Andrew Scott’s Denbigh introducing himself to Bond in M’s office, (“Pleasure to finally meet you, 007”) as well as Bond standing to greet Madeleine on the train.  The dialogue is fantastic and hints at classic Bond – Madeleine suggests “You shouldn’t stare!” for Bond to retort “You shouldn’t look like that!”  That’s about all the fans hoping for more glimpses into SPECTRE are going to get in the way of new material.  There are filming moments edited into the programme showing Bond and Madeleine standing in Morocco and some menacing shots of Mr Hinx but that’s about it.

The interviews are well handled: Ross gets to chat to Craig, Naomie Harris, Lea Seydoux, Monica Bellucci and the mighty Christoph Waltz

who thankfully seems to be enjoying conversing with Ross, as opposed to other recent interviews with Waltz promoting the film where he seems very awkward and cold to interview.  When asked what is most important about the development of Bond as a person in SPECTRE, Craig simply remarks that “You have to start with the character; what does [he] do, what’s his emotional journey?” He also echoes something that Timothy Dalton once said in interview about the character which to me is essential for nailing Fleming’s character down: “Bond’s not a superhero; he can’t stop speeding bullets, he’s got to bleed!”  This would have been an apt moment to insert the abominable CGI wave surfing from Die Another Day but the opportunity was sadly missed.

Sam Mendes discusses working on the Day of the Dead sequence at the start of the film.  Whilst we are not treated to anything new in terms of footage, presenter Ross believes it could be the one to knock The Spy who Loved Me’s extraordinary pre-titles off the top spot, and I’m hoping he’s right!  Ross spends some time looking back over the success of Craig’s Bond tenure to date but manages to largely avoid discussing Quantum of Solace, focussing much more on Skyfall and its billion dollar box office numbers being the one to beat.

In his interview with Naomie Harris, Ross makes an interesting point, asking Harris if she believes that women are most interested in Bond because he is the type of character “that women want to fix”.  Our new Moneypenny agrees with this assessment and it’s certainly food for thought.

Waltz talks about how the world would be a much better place if it was run by SPECTRE and how he attempted to “venture into the darker sides of my personality” to portray villain Franz Oberhauser.

The documentary concluded with Ross getting to drive Bond’s new Aston Martin DB10 and whilst we weren’t given a glimpse of any of the car’s hidden gadgets, it looks like a beauty of a vehicle.  Whether it will top the former DB5 in the classic stakes, only time will tell.  Ross is clearly in his element being allowed to drive the car: “Driving an actual James Bond car is a moment I’ll savour for the rest of my life.  And if I scratch it, it’s a moment I’ll be paying for for the rest of my life!”

To call this “one of the most eagerly anticipated movie releases of 2015” is a gross understatement.  It’s undeniable that this is a golden age of Bond, recalling the dizzy heights of the Goldfinger/Thunderball era in 1964/1965.  When Ross pops “the billion dollar question” to Craig as to whether he’ll be donning the tuxedo for future films, Craig remains coy but this is clearly a man who relishes the benefits of playing Bond: “these movies are rare and you’re very lucky if you get to make a movie like this.”

SPECTRE makes its debut on Monday October 26 2015 here in the UK and in the overseas market on Friday November 6.