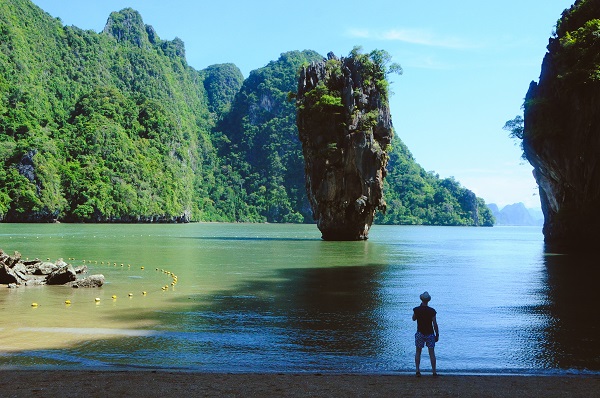 The pilgrimage to James Bond Island didn’t just start with a two-hour drive from Phuket to Phang Nga Bay, but from the moment I sat down to watch my first James Bond film circa 30 years ago. Roger Moore was always my favourite James Bond, purely because his films had the most humour.

This sentiment alone might drive some of the purists to the state of apoplexy, but many Bondologists (not that I claim to be one) and fans of the franchise have an unfathomable reservoir of affection for the late Sir Roger Moore’s interpretation of Ian Fleming’s fictional British Spy.

James Bond Island is considered the mecca for all Bond fans. There is of course James Bond Mountain, (or Bond World as it’s since been commercially coined) in Murren, Switzerland. It’s equally remote, a revolving restaurant at the tip of Schilthorn, or Piz Gloria as Ian Fleming called it, overlooking the desolate snowy Swiss alps. 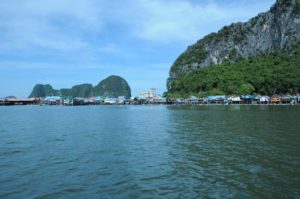 However, there’s something quite remarkable and sacrosanct about James Bond Island. It doesn’t have the retro-fitted theme park-feel that Schilthorn has. It shares the same unabashed sense of commercialism, though that’s understandable from a marketing point of view and the restaurant was part funded by the Bond franchise as the film (On Her Majesty’s Secret Service) required the complex to have a helipad.

EON has no stake in James Bond Island so the name is purely exploitative, much like the James Bond Bungee jump up the Verzasca of Ticino. (Beginning of Goldeneye).

It’s pinnacle feature is the nail head island, real name Kkao Ta Poo seen from the beach of James Bond Island, real name Khao Phing-Kan. “A strong wind of over 50mph will knock it over,” hailed one tour guide as we all jockeyed for position to take the photo.

I took umbrage to this unfounded and sensationalist statement. “Never,” I heckled. Stunning the group into silence. Not even my group I should add. Or my tour guide for that matter. “James Bond Island will never die!”

I’m not sure what I was hoping to achieve leaping to the defence of an inanimate island. Perhaps at the very least a muted cheer. Instead I saw a women shield her younglings behind her legs, no doubt never been subjected to such misguided vitriol.

From a shallow stretch of shaded beach, I looked out to the diminutive island and like never before, feared for its mortality. It stared back defiantly like a belligerent old man. I asked my guide ‘is it really going to fall over in a strong wind?‘ He shrugged his shoulders, ‘that man knows nothing‘. 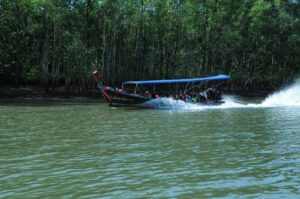 Unlike James Bond, you’ll arrive in a long tail boat as opposed to a water landing Seabee plane. The reception for tourists is on the back of the island where Scaramanga (Christopher Lee) and his squeeze Andrea Anders (Maud Adams) were seen sunning in the pre-title sequence.

A man with a tiny ladder offered me his hand as I climbed off the boat. I leapt past him dismissively and with crippling anxiety, fed the sales clerk 300 Bah and ran on ahead. They could have charged me 30, 000 baht.

It was early. All the guides will tell you to get there early to avoid the swathe of Chinese tourists waving their selfie sticks around like teenagers.

When I was there it was quiet, yet not unmolested. There were still pockets of tourists, mostly Russian. They posed back to back, some had model golden gun replicas no doubt provided by the guides who were obliging with the photography to hurry the process along. 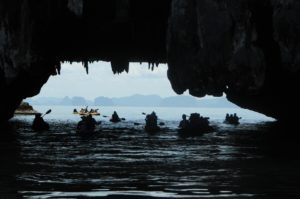 In truth, there really is very little to do on the island because it’s that tiny. There are some vendors selling your generic trinkets and over-priced carved elephants. You’ll also stand in awe of the sliding rock, Khao Phing-Kan which literally means leaning rock. 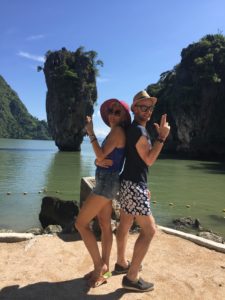 It’s also the only spot should you wish to discreetly fill your hipflask with some sand. That’s right, I did it. I knew it was not the behaviour befitting a gentleman, but to hell with being a gentleman. If I was there to be a gentleman I would have arrived in a tuxedo and drank Bollinger, not rocked up in my swim shorts clasping a half finished bottle of Fanta.

After I craftily squirrelled away a Fanta-full of sand and grubs, I perched myself on a flattened rock overlooking the beguiling nail head island. Hard to imagine if this place would still hold the same fascination had it not been enlivened by the grace of Roger Moore back in 1974.

What if production designer for The Man with the Golden Gun, Peter Murton, hadn’t chanced across pictures of Phuket Bay in a magazine? What if the original desired location of Iran wasn’t in the grips of the Yom Kippur War? Would this place remain unremarked?

After all it’s not as if the water is conducive for swimming. Due to its shallowness its teeming with plankton and I saw a danger sign for a Portuguese man of war which was more than enough of a deterrent.

There are plenty guides and signs advertising the trip to James Bond Island so you won’t have to go too far to find one. For a private tour for two you’ll be looking for a price close to 10, 000 Baht. (£230).

This included hotel pickup, lunch, private long tail transport to the island and optional Elephant Trekking, which I highly recommend. Prices may vary but this is the tour guide we used and recommend. www.EasyDayThailand.com 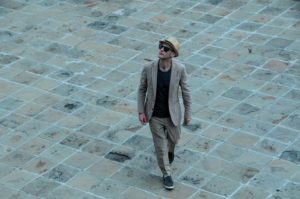