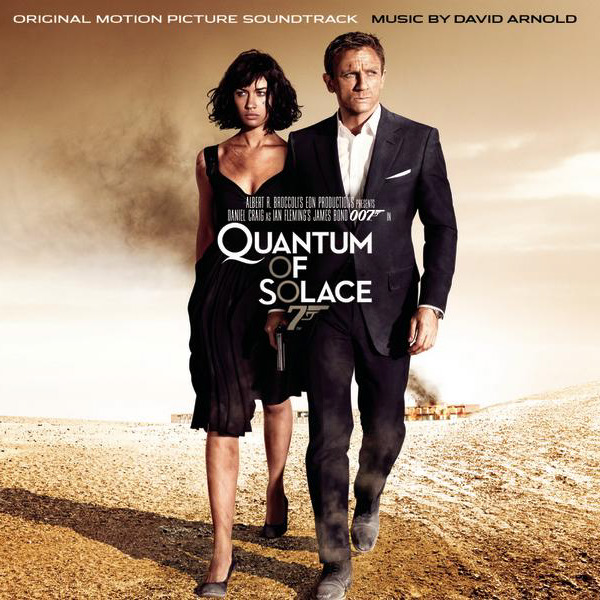 For many Bond fans, Quantum of Solace may be considered a weak entry in the franchise.  It is for me anyway.  With the huge success of Casino Royale, great expectations for Craig’s second Bond film were high, but for me it was the first time I had walked out of a cinema, after seeing a Bond film, feeling unsure.  It just wasn’t quite what I had expected.

The film was meant to have started where Casino Royale left off, but straight away the film didn’t flow.  Somehow, after shooting Mr White in the knee caps, Bond had decided to change his suit and his hairstyle was completely different. With the lack of continuity and what I consider to be, weak story, the musical aspect is an interesting one.

David Arnold had returned for his 5th Bond film after scoring Casino Royale in the same vein as Barry had done for OHMSS, where there had been a lot of different themes and melodies and very little use of electronic sound. Quantum of Solace therefore, would give Arnold the chance to get back to his usual self when it came to composing a Bond film.

However the score for Quantum Of Solace does contain a mixture of melodies and riffs, which are of great interest. The first piece of music we hear is the track called ‘Time To Get Out’ and can be heard over the pre title sequence of the film, which I think is the only scene worth watching. The track opens with slow, somewhat daunting strings and then around the one minute mark we go straight into the famous 4-note riff of the Bond theme.

It’s not until around 1:44 we have a ‘new’ piece.   I will admit that when I first bought the Quantum of Solace soundtrack back in 2008, just days before the film was released, it took me a while to get my head round this ‘new’ piece.  As a Bond fan, I have the tendency of not singing the famous title songs but whistling or humming certain tracks from the soundtracks and this ‘new’ piece that Arnold had composed was difficult.  I think it took me about 2 or 3 months to crack it, but in the process I sounded like some one who should have been in Arkham Asylum.

This ‘new’ piece lasts around 30 seconds and can be heard on other tracks throughout the score.  Mainly when the scenes involve Dominic Greene or the organisation ‘QAUNTUM’.

At 2:59 of the first track we are introduced to a very Bondesque riff that lasts for 5 seconds.

This riff features quite often throughout the score and it was noted back in 2009, that it is exactly the same as the chorus of Shirley Bassey’s ‘No Good About Good Bye’ which happened to be written, by none other than David Arnold.

Many fans had speculated that ‘No Good About Good Bye’ was a rejected title song for Quantum Of Solace but there is no proof or evidence that it was.  Personally I think the song would have worked well with film.  There’s even a mention of the words ‘Solace’ in the lyrics, plus fans had uploaded the title sequence with the great Dame herself singing.

Talking of title songs, back in August of 2008 it was announced that, for the first time in Bond music history, a duo would sing the title song to Craig’s second Bond film.  This duet was to be sung by two of the least likely people you would expect to sing a Bond song and was of course, Jack White and Alicia Keys with ‘Another Way to Die’.

Even though Arnold had never worked on a title song before, he did for the first time incorporate a song that he hadn’t written, into the films score. At the very end of ‘Time to Get Out’ there is the repetitive sound of just one note being played on the piano, which is taken straight from ‘Another Way to Die’.

In the film, after the title sequence we are then thrown into another action sequence with another brilliant piece of music called ‘The Palio’.  At 1:05 you can hear snippets of the title song but being played in a lower key. This can be heard for 20 seconds whilst at 2:06 you can hear ‘No Good About Good Bye’.

It is not until we get to track 4, entitled ‘Bond in Haiti’, where we hear more of the Bond theme.  You need to remember that the Bond theme was slowly being introduced, a bit at a time for Casino Royale, and wasn’t heard in its full glory until the very end of the film. Track 5 entitled ‘Somebody wants to Kill You’, which sounds like a title song itself, features ‘Another Way To Die‘ at 0:05 and is played on a guitar.

The next track, which is one of my favourites, is called ‘Greene and Camille’ and opens up with the very same piece that was used at the beginning of ‘The Palio’.  At 0:52 a 10 second piece is played on, what sounds like pan pipes, and is very similar to a piece that can be heard at 5:25 on the ’Antonov’ track in ‘Die Another Day’.

At 1:20 we hear ‘another’ theme which could be Dominic Greene’s theme, lasting for 15 seconds.  Around the 1:40 mark we hear the single piano note, heard in the title song followed by ‘No Good About Good Bye’. This is then instantly followed by the verse from ‘Another Way To Die’ played on strings, whilst the famous 4-note riff of the Bond theme is accompanying it at the same time.

The next track is called ‘Pursuit at Port Au Prince’ which, in my opinion, accompanied the ‘pointless’ boat chase. This is the first track where Arnold uses his traditional style of mixing heavy percussion/electronics with orchestra and can be heard at 2:55 continuing until 5:01.  At 4:36 ‘No Good About Good Bye’ makes an appearance in brass, whilst at 4.47 the Bond theme is played.  At 5:01 the electronics/percussion stop and the track appears calmer and at 5:13 the repetitive piano note can be heard again, followed by ‘No Good about Good Bye’ and then by the Bond theme.

Track 11, which is called ‘Talamone’, and is one of those perfect ‘Bond Arrives In Another Country’ pieces, accompanied by sweeping vistas connecting the previous film purely through music.  In fact, I think the music actually does remind us there is a continuity that runs through from Casino Royale to Quantum Of Solace.  Other wise with its weak script and lack of character development I wouldn’t have even noticed.

‘Talamone’ opens up with strings that play the chorus line of ‘You Know My Name’ followed by ‘No Good About Good Bye’.  In the film this piece can be heard as Bond arrives to see Mathis. Mathis was of course from Casino Royale, so to use ‘You Know My Name’ works perfectly.

However ‘Talamone’ isn’t the first piece to use music from Casino Royale. In the following track ‘What Keeps You Awake’ we hear Vesper’s theme, and this is played beautifully as it accompanies a scene where Bond is holding her necklace.  Arnold has definitely made more of an effort at connecting the two films through his music than the scriptwriter’s and director.

Also in ‘Forgive Yourself’ where Mathis dies in Bond’s arm, traces of Vesper’s theme can be heard and also in the track entitled ‘Camille’s story’. In the scene when Bond escapes the bar after Felix has tipped him off, the base line for ‘Another Way to Die’ is played.  This is the first time that particular section has been played in the score, but sadly this can only be heard on film as this was never released.

The final track entitled ‘I Never Left’ opens up with “No Good About Good Bye’ followed by Vesper’s theme.

As much as I find the film weak, I think that David Arnold’s score is certainly a complex one which uses many themes.   He gives us themes that were used in Casino Royale, such as its title song, as well as Vesper’s theme to represent characters. In addition he adds small doses of ‘Another Way to Die’, which he didn’t work on, and then heavily uses the intriguing riff that was later used for Shirley Bassey’s song, ‘No Good About Good Bye’.

As I said, there is no evidence or proof that the great Dame or ‘No Good About Good Bye’ was ever intended for the film.   As of yet…..