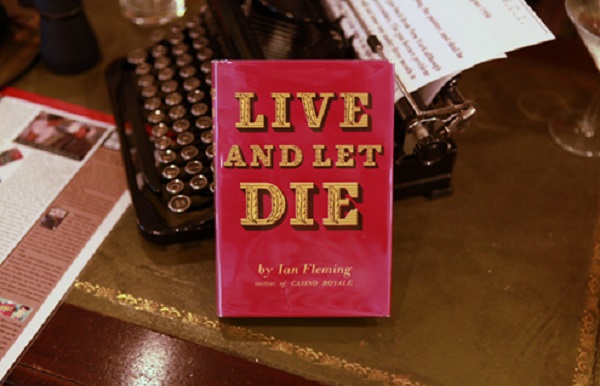 Editor’s Note: As a continuation of our Reading Fleming series, we have a review of Live and Let Die by Brandon Scott. Apologies to Brandon as he submitted this a long while back, but things got too busy for me to post this sooner.  If anyone cares to take on a review of Fleming’s Moonraker, please let us know.

To read James Bond seriously, you cannot read him seriously.  A Bond book must be read as a real world fantasy if you want to read it seriously.  Only then can one move past the cringe-worthy and dated aspects of the novel and its writer Ian Fleming – the stereotypes, the backhanded compliments of everyone not British, the obscene characterizations.  If the reader can make this jump into fantasy, then one can enjoy a thrilling novel with its superhuman protagonist, beautiful women and evil villain.  If not, then the novel collapses into the absurd, filled with stereotypes and outlandish characters conveying a dated and discredited world-view.  No more is this true than in Bond’s second outing in Live and Let Die.  It is a book filled with all that is good – and bad – in a Bond book.  But what makes this book important in the Bond canon is that we begin to see the development of the Bond universe as we know it today.  If Casino Royale is Ian Fleming testing out his new creation for the first time, it is in Live and Let Die that we see Fleming take Bond to the next level and develop the Bond motifs that we will see repeated, and will enjoy, again and again.  In it we see the Bond universe establish itself and Fleming invoke his trick of blurring the line between reality and fantasy.  And in this way Live and Let Die is a complete success despite the other failings of Ian Fleming.

The plot in Live and Let Die is not the driving force of the book.  The whole premise of the story is laid out fairly early in the story.  “M” brings Bond in to assign him to his mission and “M” has essentially already solved any mystery there might be – gold coins from once-thought lost Bloody Morgan’s treasure are being smuggled into the United States, laundered and then being used to finance Soviet espionage.  “M” has even guessed the location of the treasure in Jamaica and who is doing the smuggling – Mr. Big.  All of this is revealed in the second chapter of the novel.  The book continues without a plot twist as all of the information “M” has given Bond is proven correct.  However, this does not distract from the story since the novel moves forward not on Bond trying to solve a mystery, but in the journey and what adventures and perils Bond encounters along the way.  Bond gets thrown into the depths of Harlem and barely escapes with his life; he travels via train down the East Coast of the United States from New York to Florida with Mr. Big’s network of villainy hot on his trail; after another series of close calls in Florida he escapes to Jamaica to set up his final encounter with Mr. Big.

As part of this journey Fleming continues to refine the elements of his fantasy world that we enjoy so much.  In this novel we begin to see the universe building that seasoned Bond fans will enjoy for countless novels.  “M”, Felix Leiter and SMERSH are back and we are introduced to Quarrel, Universal Export and Strangways – all elements of the Bond universe that we will see again in future novels.  The “Bond Girl” is back, this time in mystical Solitaire, and quickly throws herself into Bonds rescuing arms.  The disfigured villain returns, this time Mr. Big, who commands Bond’s respect and disgust and whose ultimate end is what drives Bond.   You can see in this book that Fleming is now committed to his creation and his world of espionage and wants to connect his books with more than just the reoccurring hero.  The main characters are becoming a staple in each story and Fleming’s favorite motifs are being firmly established.

The other important development that Live and Let Die makes into the Bond universe is the creation of a fantasy world that lives within our real world.  This is one of the great tricks of Fleming: to combine the real world with the fantasy world to such an extent that the reader loses track of the line between reality and fantasy.  Known for a journalistic eye for detail, Fleming fills his world with all the minute details of the real world.  No corporate brand is too insignificant not to mention.  No description of Caribbean underwater life is worth missing.  No minute detail irrelevant.  The result being that the reader, recognizing all the details from the real world, begins to believe that this is the real world.

We did not see this in Fleming’s first Bond novel.  The world Fleming created in Casino Royale was fairly grounded in reality.  The locations, the villain, the plot could be easily imagined for the reader.  The locale of a French casino, while an exciting world that most may not have experienced first hand, is not that far removed for most readers.  It is in Live and Let Die that we see James Bond the world adventurer exploring distant and exotic locales filled with even more exotic dangers, women and villains.  The Harlem or Jamaica of Live and Let Die likely seemed otherworldly for most readers in the pre-globalization world of the 1950s.

This is also where one can easily criticize Fleming.  In blurring the Bond fantasy world he has created with the real world in which the reader lives, we encounter characters that seem unbelievable at times at the expense of real people from our world.  Is the picture of Harlem that Fleming creates the real Harlem of the 1950s?  It is described in such detail that you can imagine it to be so but any serious study of Harlem of the 1950s would show that what Fleming presents is only a stereotyped, if not outright racists and xenophobic, sliver of what Harlem must have looked like.  The Harlem of Live and Let Die is dominated by Voodoo superstition, jive talk and African-American agents under the spell of Mr. Big at every corner tracking Bond’s every move.  Reality?  Probably not.  And Fleming’s choice of words, descriptions and editorializing of everything non-British is beyond insensitive, especially to the 21st century reader.  The argument that Fleming’s writing is a product of the time and we should take such language in passing is not a defensible argument.  But to this reader you don’t read a Bond book to get an education of reality, you read it to get lost in a fantasy world – even if that fantasy world is an absurd, over-the-top, one-sided view of our reality.  Yes, the language and opinions are antiquated and the stereotypes are unceasing but this a fantasy world.  Is this a defense of the worst aspects of Live and Let Die and of Fleming at his worst?  No, and we shouldn’t try to defend it.  However, it is every part of a Bond novel – from the best suspense to its worst stereotypes – that combine to make an interesting and compelling read.  Fleming’s writing, tricking the reader with real world detail and description, is what makes the fantasy world so real.  That’s why the reader can believe that there exists a network of Voodoo-crazed agents of Mr. Big lurking around every corner, watching Bond’s every move.  It is unfortunate that Fleming creates this vivid world at the expense of others.

Live and Let Die is an important book in the Bond canon and an important step in establishing the Bond formula.  In it we see Fleming create a world like our own but at the same time so far removed from our own.  It is in this world that Fleming will continue to play with each successive Bond novel.  It is not a perfect world but it is still a fascinating world in which we see Bond at his best and sometimes Fleming at his worst.