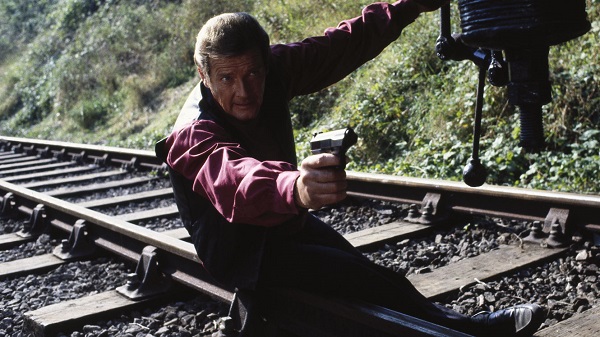 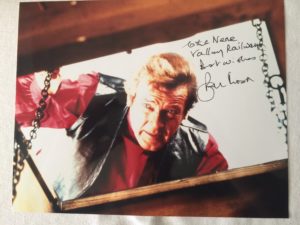 In September 1982, I was 9 years old when the train scenes in Octopussy were filmed at the Nene Valley Railway (NVR), Peterborough close to where my family lived.  As a result it’s become my favourite Bond film. I have such great memories of growing up with it as a kid, enjoying it ironically as a teenager, and as an adult getting to fully appreciate the beauty of it’s Scandinavian star because for me the Octopussy Circus Train is the unsung star of the film.

Over the last decade I’ve written the ‘ESP-ionage’ files for ESP Magazine, (Peterborough’s local monthly magazine) celebrating the Bond films, their links to the NVR and I’ve also become involved in an exciting Bond related project (more on that later)

One of the main reasons that the Nene Valley Railway was chosen a film location for Octopussy was because it was one of the only preserved railway lines in the UK that was able to operate continental stock and had a good supply of locomotives, wagons and carriages that could successfully pass for the kinds of steam train services used in mainland Europe.

The ‘Octopussy International Circus Train’ that can be seen steaming along the tracks in Octopussy was made up of:

All joking aside, one of the reasons that the Wagon Lit carriages were used was because prior to arriving at the NVR in the late 1970’s they had in real life formed part of the Nord Express (a train service service similar to the Orient Express) and also operated by Compagnie Internationale des Wagon-Lits who’s  route started in Paris and traveled via Brussels, Cologne, Hanover, Berlin and onto St Petersburg.

Interestingly Wagon Lit 3916 still has two sister cars no. 3912 and 3915 that are still in use with the modern day luxurious Venice-Simplon Orient Express (VSOE) and of course the Orient Express is forever linked with the Bond films after it’s stunning use in From Russia With Love (and another reason John Glen was keen to use similar Wagon Lit carriages in Octopussy).

Once the Octopussy filming had finished in October 1982 the locos and carriages that had been used (minus the circus signage) became the NVR’s ‘Santa Special’ service which has run every year since the NVR opened in 1977.
In the build up to Christmas 1982,  my grandparents took me on it for the very first time and we sat in the Wagon Lits dining car 2975 and the loco that pulled the ‘Santa Special’ that year and many more was the Swedish B Class No. 101 (number 1697). This will be better known to Bond fans everywhere as the locomotive that smashes into the black Mercedes catapulting it into the river after 007 leaps from it onto the circus train.

During the Octopussy filming the Swedish 1697 loco was disguised as DR 38-243 and numbered 75 561. (This autographed signed photograph from Bondstars that was on ebay recently shows how it looked back in 1982 at NVR )

The loco now forms part of a static display and sits in pride of place as the ‘Gate Guardian’ at NVR along with the Wagon Lits dining car 2975.

In 2012 as part of the ‘007 days of Bond’ tour to celebrate the 50th anniversary of James Bond, Octopussy director John Glen visited with stuntman Paul Weston (who doubled for Roger Moore in some of the scenes on top of the Octopussy circus train) and presented the NVR with a commemorative plaque. Soon after I became involved in a project to restore the ‘Atomic Bond Wagon’ after years of neglect.

The other CCT wagons and Norwegian 601 coach are still at NVR, whilst the DSB S 740 loco was returned to Denmark in 1995.

I hope you’ve found this blog of interest, and whilst it’s not possible to have the original Octopussy Circus Train back on the tracks, the NVR is still definitely worth a visit to see some of the stock, the locations used in the Octopussy filming,  and when it was used more briefly in Goldeneye. 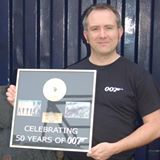