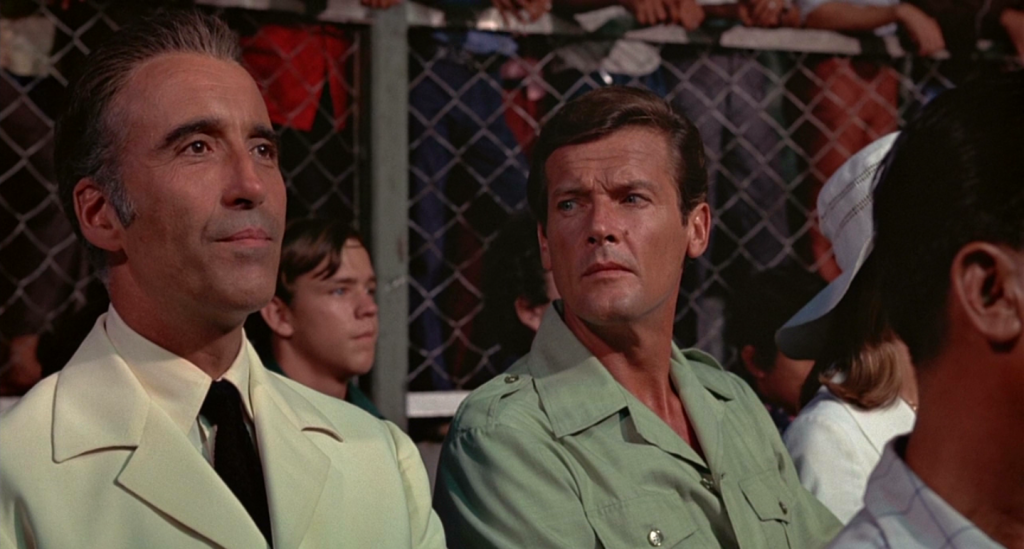 Welcome back to “This Week in James Bond”! As many of you may know, a new TV spot for SPECTRE aired during Game 3 of the NBA finals on 9 June and is now available to view on YouTube.

You can listen to Tom’s reaction and breakdown of the new TV spot below. Your humble correspondent has also written a frame-by-frame breakdown of the TV spot, which you can read here; both are laden with speculative rumours and possible spoilers, so listen/read at your own risk if you are trying to remain spoiler-free for SPECTRE.

In other news, the legendary Sir Christopher Lee passed away on 11 June. The prolific actor, who appeared in over 200 films, was 93. Among those who posted heartfelt messages on social media to remember Lee’s legacy were a few of his fellow Bond alumni.

It's terribly when you lose an old friend, and Christopher Lee was one of my oldest. We first met in 1948.

So sad to say good bye to my old nemesis Christopher Lee. Such a talented man and not just in movies. Love to Brigitte

RIP to the one & only Saruman, Dracula & the face of so many unforgettable roles –Christopher Lee won't be forgotten pic.twitter.com/YQWcpd498p

We're deeply saddened by the passing of one of the galaxy's true legends, Sir Christopher Lee. http://t.co/7qEW3g2DNh pic.twitter.com/vst4Cd2lwD

Edlitz: While there is deservedly much discussion about how suave and funny you were as Bond, you were also very good at making him cold-blooded and lethal. How did you approach those scenes?

Moore: Well if you read the Internet blogs, they agree I was funny, but they’re not so sure I was suave and certainly they don’t regard me as having been cold-blooded. There was one scene in For Your Eyes Only where I had to be rather cold-blooded in killing a villain. They say that scene changed the series tone for my films, but I wasn’t comfortable with it, if truth be known.

Edlitz: From the movies, we learn so little about Bond personally. What do you imagine his private life is like?

Moore: It’s probably one bar to another bed. I’d imagine his private life to be rather limited as he’s seemingly always on the job.

Edlitz: When people meet you on some level (perhaps an unconscious one) they believe that they’re actually meeting James Bond. Are you aware of that? What’s that like for you? Do you feel any pressure to meet those expectations?

Moore: Oh, I don’t think they think I’m Bond. Well, ok, maybe. I sometimes get comments like “Hello, Mr. Bond” and such like. I smile and keep walking, but if someone comes up to me and says “Hey, you’re James Bond!” I’ll say, “No, I am Roger Moore, I used to play James Bond.” I don’t pretend I am the character.

Moore: Personally, it has given me financial security. It has also provided me with a certain celebrity, if that is the right word, which has enabled me to work as a Goodwill Ambassador for UNICEF … It is a great asset. After all, who would want to meet a jobbing actor? But meeting an actor who once played James Bond, that opens doors. I find I’m able to meet with presidents, prime ministers and people who make decisions. Bond has afforded me a great personal passport, which I use for UNICEF.

JBR listeners in Pennsylvania and the surrounding area may be pleased to learn that the Frank Banko Alehouse Cinemas in Bethlehem, PA will be showing all seven (yes, that includes Never Say Never Again) of Sean Connery’s James Bond films throughout June and July.

Connery himself was spotted at Miami airport on 12 June. The actor has lived in the Bahamas for decades and has rarely been seen in public since his retirement from acting after 2003’s The League of Extraordinary Gentlemen. (Source: Daily Mirror) Pierce Brosnan is back in his homeland of Ireland to film scenes for the upcoming revenge thriller I.T., in which he will portray “a successful book publisher who finds himself pitted against a young disgruntled I.T. consultant who is tech savvy and uses that to threaten the author’s family and livelihood”. The film will be produced by, among others, Beau St Clair – Brosnan’s partner in their production company Irish Dreamtime. While the actor spent some time in Dublin, fans posted photos of the actor to social media. (Source: Deadline)

So @PierceBrosnan you had our girls very distracted at lunch, hope you enjoyed your pint! Thanks for stopping by! ☺ pic.twitter.com/cGGCoLA6Bj

And finally, hot on the heels of the announcement of “Trigger Mortis”, author Anthony Horowitz confirmed via Twitter on 1 June that Bond would be driving a Bentley in the novel. Click on the tweet below and scroll down to read Horowitz’s reply.

.@AnthonyHorowitz Since Trigger Mortis is set 2 weeks after Goldfinger is it Bentley or Aston Martin?

On that note, that’s all for “This Week in James Bond”! As always, don’t forget to tune in to the podcast and join the conversation on social media.