This Week in James Bond: The ladies of SPECTRE bond over Bond, and Pierce Brosnan’s picks for the next 007 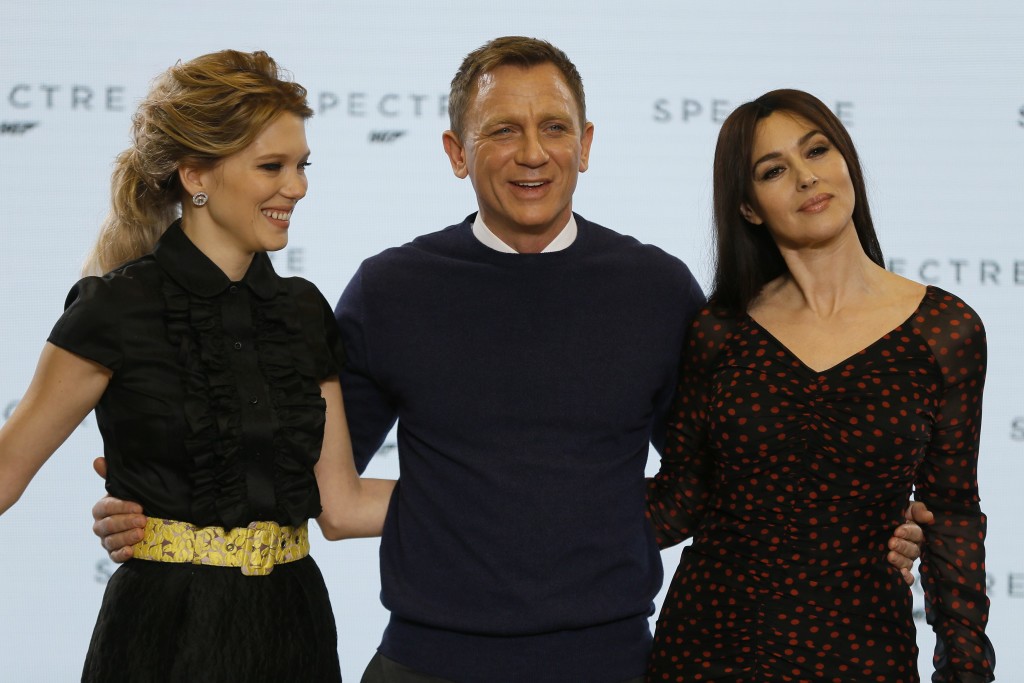 Welcome back to “This Week in James Bond”! Before we get started, your devoted correspondent here at Station C would like to express her condolences to the family of Louis Jourdan, whose death at the age of 93 was announced shortly after last week’s TWIJB was published. A great actor and certainly a highlight of (what I consider to be) one of the best and most entertaining James Bond films.

If you missed our coverage of the Rome photocall, featuring Daniel Craig and Monica Bellucci, you can check out some of the images from the photocall below. Our article about the photocall has a bonus video (and a bonus picture of Craig and Eva Green from 2006!) but also contains potential SPECTRE spoilers, so do exercise caution if you are choosing to remain completely spoiler-free for the film.

Various sources reported on 17 February that while filming a driving stunt for SPECTRE in Innsbruck, second unit crew members lost control of one vehicle (possibly a camera truck), and it crashed into other crew members and a neighbouring barn. Second unit assistant director Terry Madden, who has worked on the set of every Bond film since For Your Eyes Only (1981) and other classic films like Star Wars (1977), was injured in the crash; Madden, along with the other victims, were flown via helicopter to a nearby hospital. Filming has since concluded in Austria and the main unit has moved to Rome to begin work there. (Sources: The Hollywood Reporter and the Daily Mail)

The Daily Mail published an exclusive interview on 21 February with the Bond girls – or as they themselves prefer to be called, “Bond ladies” – of SPECTRE, Léa Seydoux (portraying Madeleine Swann) and Monica Bellucci (portraying Lucia Sciarra).

“My first thought was, ‘How can I be a Bond girl at 50?’ After my audition Sam Mendes told me that, for the first time in history, he wanted a woman of a similar age to the actor playing Bond. I told Sam he would be a hero among women for casting me in SPECTRE … Compared to the Bond girls who have gone before me, I am so much more mature. I’d prefer to be called a Bond woman or perhaps a Bond lady … It is no surprise to me that men still find women like Isabelle Huppert, Catherine Deneuve and Charlotte Rampling very attractive. Men look at Judi Dench and they see so much strength, so much power that comes from inside … I look at those women and hope that I can have that interior richness as I get older, the kind you cannot see through the eyes.”

Seydoux spoke about the doubts and problems she faced on her journey to becoming a Bond girl, and also explained the process of auditioning for such a role.

“I started to wonder whether I had it in me to be a Bond girl. I wondered whether I was beautiful enough … I got the part in April 2014 and filming didn’t start until December, and so maybe I had too much time to think about it.”

“The first audition took place at a hotel in Paris. I joined the three other contenders in line. We were there to read lines from Casino Royale and Quantum of Solace … I was nervous so I drank a little beer to relax myself. When it was time for my audition, my face was bright red and I forgot my lines … That made me very sad but I asked if I could audition a second time. After that, they asked if I could meet Sam Mendes at his office in London. I think he really liked me … Then, in April 2014, I had lunch with Sam in London. He told me I was part of the film.”

The unprecedented 21-year age difference between the two leading ladies was most apparent when quizzed about their opinions of Bond girls prior to working on SPECTRE.

“When I think about the Bond girls from the past, I think of images frozen in time: Ursula Andress emerging from the water or Shirley Eaton painted in gold.”

“I especially identified with [Vesper Lynd]. It impressed me that a French actress was playing a Bond girl. I was taken with the way she could be intense and mysterious, strong and vulnerable, girlish and womanly. I love it when an actress can play with contradictions. But there’s no way I could have imagined myself playing a Bond girl nearly ten years later. For me, that dream was too big.”

Seydoux also elaborated on the story behind the name of her character in SPECTRE.

“She has the power to change Bond’s life. Her name is, of course, a nod to Marcel Proust. In Proust’s ‘Swann’s Way’, the opening book of ‘Remembrance Of Things Past’, the madeleine sponge cake has the potential to evoke powerful memories. The name has been chosen deliberately for this film. Madeleine Swann is a catalyst for change. She helps Bond open the mystery so it is revealed.”

Monica Bellucci also revealed in a separate interview with the Sunday Times that when meeting with Sam Mendes to discuss the possibility of appearing in SPECTRE, she thought she would be replacing Dame Judi Dench. (Source: The Telegraph)

George Lazenby was spotted at the GREAT British Film Reception, honouring the (many) British nominees of the 87th annual Academy Awards, on 20 February in West Hollywood. Lazenby was photographed posing with a vehicle befitting the swinging sixties James Bond that he portrayed in On Her Majesty’s Secret Service. News.com.au also spoke briefly to their fellow countryman about playing James Bond, and Lazenby’s comments on the matter were in line with much of what he has said before about the role.

“I got more girls before I was Bond. I was a male model working with a different female model every day … the odds were better.”

Pierce Brosnan’s choices for the seventh 007

The Daily Mail reported on 17 February that Brosnan has given a casual endorsement of sorts to Idris Elba and Colin Salmon, in terms of who should follow Daniel Craig in the role. Brosnan recently said the following:

“Yeah, [Idris Elba] would make a good Bond. Colin Salmon also. May the best man get the job and may Daniel bring home the bacon for as long as he wants.”

Most Bond fans know that Colin Salmon appeared in Brosnan’s latter three Bond films as Charles Robinson, MI6’s Deputy Chief of Staff (alongside Chief of Staff Bill Tanner, played in the Brosnan era by Michael Kitchen). Brosnan previously voiced his support of Salmon to adopt the 007 mantle on two occasions: the first occurring in 2005, shortly after the search for the sixth actor to play James Bond had started, when Brosnan endorsed both Salmon and Gerard Butler. The second occurred in 2013, when Brosnan said the following in an interview with the Telegraph while promoting Love Is All You Need:

“I’ve always thrown Colin Salmon’s name in the mix [for the next 007]. He’s somebody I have worked with closely over the years. He would be outstanding and I think it would be absolutely essential.”

And finally, if you’ve ever wanted to hear Roger Moore speak (fairly fluently) in three languages other than English, today is your lucky day. Moore recently starred in a series of television commercials for the Swiss telecommunications giant Swisscom in which he speaks in French, German, and Italian (the official languages of Switzerland, along with Romansh).

Moore owns a chalet in Switzerland and spends a sizeable part of each year there; the actor also mentioned in an interview with British comedian David Walliams in the November 2012 issue of GQ (UK) that Curd Jurgens (Stromberg from The Spy Who Loved Me) once loaned Moore his house in Gstaad.