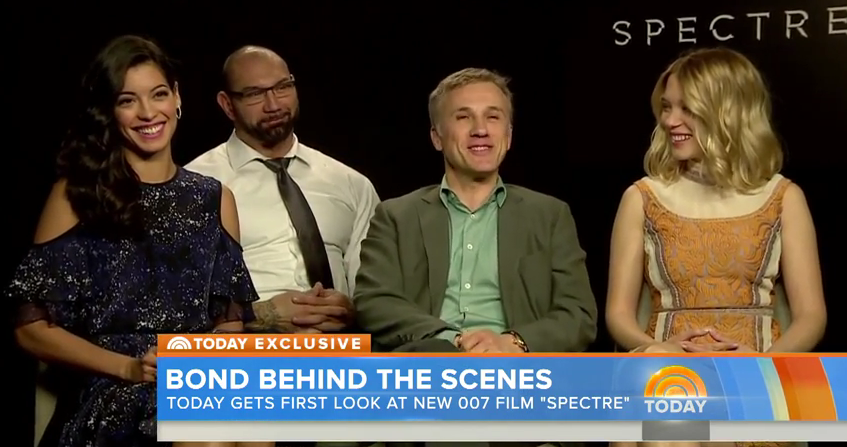 Welcome back to “This Week in James Bond” – and what an exciting week it has been for Bond fans! If you haven’t yet seen the new teaser trailer for SPECTRE, you can check it out here; you can also listen to Tom talk about it to himself for half an hour if you haven’t got better things to do. (I kid, Tom, I kid. Please don’t throw me out of the Zorin Industries zeppelin.)

George Lazenby talks about On Her Majesty’s Secret Service

TWIJB reported a few weeks ago about the premiere of On Her Majesty’s Secret Service, the 1969 James Bond film starring George Lazenby and Diana Rigg, at the 2015 TCM Classic Film Festival in Los Angeles. The premiere of the film occurred on 27 March and Lazenby himself was in attendance to share stories about his time as James Bond. Scott Feinberg from The Hollywood Reporter sat down with everyone’s favourite “other fellow” to talk about how the latter became 007, misunderstandings he had with director Peter Hunt, sex on set, and why he walked away from the role; you can listen to the 30-minute podcast of their discussion below. (Thanks to JBR listener Sheila James for finding it!)

Hot on the heels of the newly released teaser trailer, on 29 March, Barbara Broccoli and Michael G. Wilson spoke to IGN (among others) on location in Mexico City about the film. The majority of their interview appeared to consist of the interviewer attempting to elicit plot details while the executive producers laughed and remained coy, but there were some important things that Broccoli and Wilson let slip. (There are very mild spoilers in the above IGN interview, so please exercise caution if you are trying to remain spoiler-free for SPECTRE. I will not be mentioning anything spoilery in this post.)

The producers first revealed that they have not yet decided who will be writing and performing the theme song to SPECTRE, which contradicts claims made by Sam Mendes in December 2014 that the artist had already been chosen. (Source: MTV UK)

Press: When might you announce who will be doing the theme song? Are you having discussions now?

Barbara Broccoli: We’re still figuring that out. That’s one of the last pieces in the puzzle, but it’s one of the fun things we look forward to. So it’ll be awhile.

The producers also stated that SPECTRE will not be a two-part movie, and revealed that the script for SPECTRE has been in the works since shortly after the release of Skyfall in 2012. JBR listeners may recall that back in March 2014 (when John Logan was still the sole screenwriter of the then-untitled 24th James Bond movie – Neal Purvis and Robert Wade’s involvement with the script was first reported in late June of 2014), Logan said that the first draft of the script was almost done. (Source: Empire Magazine)

Press: How long has this script been around?

Michael G. Wilson: Almost three years. Two and a half, certainly — the first draft. No idea as far as treatments.

Broccoli also briefly addressed the role that Eve Moneypenny will play in SPECTRE with regards to Bond’s mission.

Barbara Broccoli: You can’t keep this one behind the desk. [Laughs] This Moneypenny is very active, and she’s key to the story and key to helping Bond on his missions. So she’s not desk-bound.

On the same day (29 March), the first production still of Estrella – played by Mexican actress Stephanie Sigman – was released. Sigman also spoke briefly about her scenes with Daniel Craig, assuring reporters that there would be a lot of sexual chemistry (“The scene is sexy … we do have a lot of chemistry, which makes everything interesting and helps when there are a lot of takes”), and about being a Bond girl. (Source: Daily Express)

“It feels like a dream come true, being a Bond girl. I feel like a princess. It’s hard to believe it when I say, ‘I’m a Bond girl’. It’s going to be amazing, the [word omitted due to spoilers] sequence I’m in. I started acting only five years ago, so to be in 007 is amazing.”

And if you happen to be in the greater London area on Sunday, April 5, why not come celebrate the birthday of our very own Tom Sears in style by watching Goldfinger (1964) with other JBR listeners and Bond fans? Buy your tickets here (only 35 left at this time of writing!) and RSVP on Facebook!