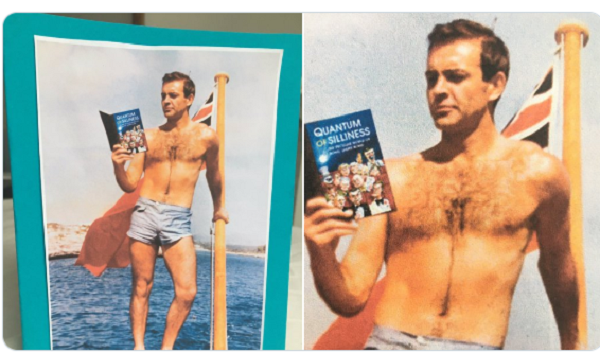 The recent postponement of No Time To Die has come as a blow to the Bond fan community.  Many of us started to book screenings and made plans to celebrate the latest entry in our beloved film franchise only to be shocked and dismayed by the most recent delay pushing back the film’s release from April to November 2020. Whatever your feelings may be regarding this most recent delay, there are constructive ways to get new James Bond content into our lives while we wait. After all, Bond originated on the page and he was a comic strip character prior to the launch of the film franchise.  If you’re finding yourself in desperate need of Bondage ( and why wouldn’t you?), what better way to pass the time than to catch up with some Bond books published recently?  In fact I’m willing to bet some of these Bond books will prove just as engrossing (if not more) as Bond’s reading material while waiting for Gumbold’s safe to crack. 😉 (Book covers link to the UK Amazon website unless otherwise noted) 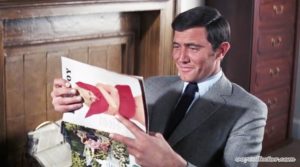 1. Quantum of Silliness by Robbie Sims

–  Anyone who follows Bond fan accounts on Twitter absolutely must follow @TheTchaikovsky for his wit and esoteric hilarious takes on everything Bond. I frequently look to his Twitter page for funny Bond posts and his book seems like an absolute delight. I’m very much looking forward to reading it.  He poses such questions as: ” Who gives the hammiest performance in a Bond film? What is the series’ most cringeworthy moment? What quips would Sir Roger Moore come out with if he starred in Licence to Kill?” If that’s not enough to convince you to pick up this book, his recent Tweet advertised that the book features:

Thoughts from the Cubby-hole

2. Raising an Eyebrow: My Life with Sir Roger Moore by Gareth Owen

– As Bond fans most of us have become familiar with Gareth Owen who served as Sir Roger’s right hand man for 15 years through to his final days. Gareth’s insight into the life and career of Sir Roger is unparalleled.  This book is of great service to those of us who miss Roger and would give anything to hear his voice tell us one more good story.

3. Nobody Does It Better by Mark A. Altman and Edward Gross

– The same writers who previously published two popular Star Trek “unauthorized oral history” volumes have now taken the same approach to a comprehensive history of Bond. At over 700 pages, this mammoth tome will provide endless new reading material for Bond fans to consume in the months leading up to No Time To Die.

– I had the opportunity to recently interview Vita Ayala and Danny Lore for an upcoming Comics of Bond JBR episode. They are an incredibly talented writing team who have devised a brand new Bond story we’re sure to enjoy.  During our talk, the writers confirmed that this comic will feature the return of Mr. Big in this exciting new adventure set in the present day. Bond must team up with Brandy Keys, an insurance claim investigator and art expert to get to the bottom of an international crime syndicate smuggling counterfeit art but that’s only the beginning.  The first issue focuses mainly on introducing the new characters to set up the story, but don’t let that deter you.  There’s a lot for Bond fans to enjoy with this series as it unfolds.

– This is a Bond comics title I’m most fascinated by.  It’s an anthology of six Bond stories set around an overall frame story involving the kidnapping of Moneypenny. A number of Dynamite Comics stalwarts were involved in bringing this collection to life including Greg Pak, who previously worked on the last Bond comics series throughout 2019, which introduced a henchman inspired by Oddjob. The noir-inspired cover artwork seems somewhat reminiscent of the Pan paperback series of Fleming books. I’m greatly looking forward to diving right into this collection as soon as I get my hands on it.

6. The Many Lives of James Bond by Mark Edlitz

– Author Mark Edlitz was a JBR guest in November of 2019 and I also reviewed his book around that same time as well. Mark’s book offers a compelling look at the creative people who have played a role in bringing James Bond to life over the years.  The book features interviews with Bond actors, directors, screenwriters, and a number of artists and creators who may not immediately spring to mind with even the most knowledgeable Bond fans.  If you’re a Bond fan and you don’t already own this book, you owe it to yourself to pick it up.  I guarantee you’ll learn something you didn’t already know.

7. Geographies, Genders, and Geopolitics by Lisa Funnell and Klaus Dodds

-Lisa Funnell’s analyses and deconstructions of Bond on social media and in her articles should be of keen interest to anyone interested in looking at Bond on an academic level. Dr. Funnell is a professor at the University of Oklahoma and she teaches a course called Gender and James Bond. This is a book I currently own and look forward to engaging with now that there’s plenty of time before the debut of No Time To Die.  I think we can all benefit from thinking about some of the topics explored within this book.

– Matthew Chernov interviewed Monica Germanà for the JBR website in November of last year. The author described the book as tackling some of the “problems arising from Bond’s attitude towards gender by deconstructing who Bond is.” For those of us who want to examine the role of femininity in the Bond franchise and challenge some common misconceptions about feminism, this is the perfect book to explore these topics.

– Legendary photographer Terry O’Neill captured a number of iconic images throughout his career including photographs of The Beatles, The Rolling Stones, Elton John, Frank Sinatra, Winston Churchill and Nelson Mandela.  This promises to be the must own Bond coffee table book of the year as it includes, “Iconic portraits and contact sheets from Goldfinger, Diamonds are Forever, Live and Let Die, Golden Eye and the Bond spoof, Casino Royale.”

Robert Sellers was an early guest of the JBR podcast back in 2014 when he talked with Tom and Chris all about his first book Battle for Bond, which extensively covered the saga of Thunderball and Kevin McClory’s claims against Fleming and Eon. Sellers’s latest book is all about the friendship and partnership between Cubby Broccoli and Harry Saltzman. Bond fans will no doubt find this book fascinating.

– I had the pleasure of interviewing Van Jensen for a JBR Comics of Bond episode in November of last year. Van Jensen previously adapted Casino Royale for Dynamite Comics and he’s proven himself more than adept at bringing Fleming to life in the comics medium. As a Bond fan, I think his Fleming adaptations breathe new life into these stories enabling us to experience the literary Bond from an entirely new perspective. Bond fans often forget that the original Daily Express comic strips of the 1950s adapted Fleming prior to the successful launch of the Eon cinematic franchise. Van Jensen’s new Fleming comic adaptations have served to further cement this legacy of the literary Bond.

12. Fleming’s Wars: The History Behind the Fiction of Ian Fleming’s James Bond by Edward Michael Rosary

– This nonfiction book was released earlier this year.  The author is currently an adjunct history professor at Ivy Tech Community College in Indiana. His book explores the notion of Ian Fleming creating James Bond as a Cold War allegory and as “the representative of Britain’s resolve during the Second World War.” This is a book I’m intrigued by as it promises to explore how Fleming’s life, career, and history may have interwoven with the fiction of his literary Bond.

Needless to say each of these titles present new pathways to learning about and appreciating Bond.  I think it’s easy to lose sight of the fact that Bond is more than just an Eon-sanctioned cinematic event gracing us upon a silver screen once every 4-5 years.  These books are just a limited selection of the many avenues available to us to explore, examine, deconstruct, and even redefine the character of Bond.  There are new Bond adventures and histories being told TODAY RIGHT NOW WAITING FOR US TO FIND THEM in the unread chapters of these books and many others. It’s up to you to decide whether you’re willing go on that journey. Before celluloid there was the page . . . and that’s where the tradition of Fleming lives on.

article by Jack Lugo – Follow me on Twitter @JackLugo1 and check out my personal blog for short stories, Bond musings, and other writing.