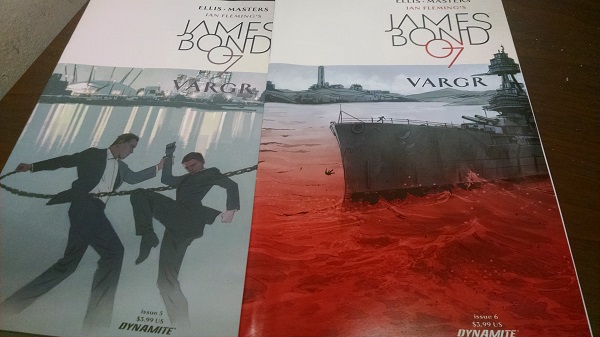 Warning: This review contains SPOILERS for the final issues of VARGR

Apologies for taking so long to finish off this series review of VARGR.  I actually finished reading this compelling series as soon as the last issue arrived, but I didn’t have time to sit down and write a review.  Before I knew it I found myself occupied by other things and this final review just slipped away from me. By now I realize that the latest issues of Eidolon have already hit the shelves, but for now I’ve decided to wait until the hardcover edition comes out as it’s much easier to review the story as one complete work rather than review the individual issues.

When we last left Bond in issue #4, Bond was trapped in a decontamination chamber behind bullet proof glass by the main villain Kurjak who had synthesized a new lethal drug now wreaking havoc in the UK.  The decontamination process started at the end of the last issue and now we begin issue 5 wondering just how our favorite hero will get out.  Not only does he manage to escape, he finds time to enjoy a cigarette afterwards.  Remember, the good ol’ days when Bond smoked?

We then get a nice little “Peter Franks” call back as Bond returns to London.  Many Bond fans will remember that Bond used the Peter Franks alias in Diamond are Forever.  I thought that was a nice little touch.  M. informs Bond that a possible 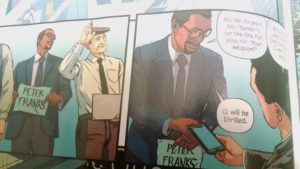 contaminated package had just been tracked by MI5 at the local docks.  Bond pursues the lead only to run into Dharma, Kurjak’s accomplice who now seeks revenge for the death of her lover Bryan Masters who Bond killed in the previous issue.  A fight ensues with Bond cleverly dispatching her using her metallic prosthesis to his advantage.  It’s a little disarming watching Bond fight with a woman even if the comic makes Dharma out to be an assassin in her own right.  Usually, we would either see Bond convert her to the side of good, or we would witness her death at the hands of the villain or a female Bond ally.  While I didn’t expect the writers of VARGR to follow all the typical Bond tropes from the films, I was expecting something different for this character since they invested so much in her back story in the previous issues.  Later Bond remarks, “and then the batteries in her prosthetic arms explosively combusted” while pouring himself a drink. 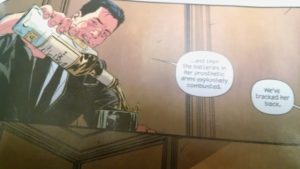 We then learn that bond must travel to Norway to pursue a battleship called VARGR where Kurjak’s main operation is based. 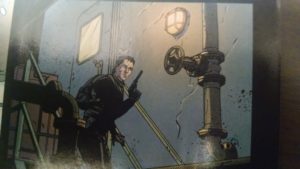 In issue #6, Bond is equipped with a sniper rifle and a suppressor for his Walther PPK.  The RAF airdrop Bond and he easily infiltrates the ship sets up his explosives and goes about well . . . being Bond.  It’s nice to see Bond in stealth mode for a while as he sneaks about the battleship without anyone taking notice.  When they finally do realize there is an intruder, it’s far too late.  Bond kills just about every guard Kurjak’s sends to pursue him.  We also get a nice helping of hand to hand combat before Bond bolts off the ship and triggers the explosion leaving Kurjak alone and defenseless. Bond demands to know the reasons for Kurjak’s villainy, but Kurjak offers only a feeble response.  Bond kills Kurjak in cold blood and that is the end of the VARGR story. 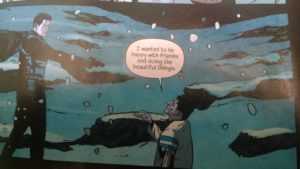 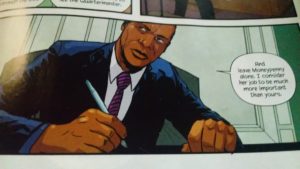 Overall, I think there are strengths and weaknesses to VARGR.  I think writer Warren Ellis and artist Jason Masters have done a good job with the characterization of Bond as well the MI6 team.  Even though this is an original story taking place in the present day, it’s easy to tell that they took plenty of inspiration from Fleming as well as the cinematic franchise in this piece and it shows in how Bond relates to M., Bill Tanner, and Miss Moneypenny.  The repartee between Bond and the MI6 team is damn near perfect.  The action sequences are very well crafted and many panels stand out as great Bond artwork sure to attract many fans.

The story and the villains themselves are a little murky.  I think I was mostly impressed in the early issues before I knew where they were going with it, but as we got to the end, I felt there are certain things that they could have done more with and certain plot choices that could have been better executed. I think Dharma turns out to be a bit of a wasted character.

It would have been nice to have more than just a fatal fight between her and Bond as her final moments in the story.  Also, I think the ending with Kurjak’s demise seemed a bit weak.  I think we had sufficient reasons earlier on to know why Kurjak was engaged in his experiments, and I don’t know why Bond would ask him to clarify his motives at the end rather than just go for the kill.  I also think that the MI6 segments that focus on new regulations prohibiting Bond from carrying a weapon within the UK weigh down the plot quite a bit.

Despite my criticisms, I really enjoyed VARGR and look forward to a new era of Bond comics commencing with Eidolon, which promises the return of SPECTRE for the first time in this comic incarnation of Bond.  I’m glad Bond has returned to the comics medium, and I know there is more to come including a brand new adaptation of Casino Royale.  Furthermore, there is a brand new series called Hammerhead by Andy Diggle and Luca Caslanguida. Indeed, it’s safe to say James Bond will return . . . or rather he’s here to stay.